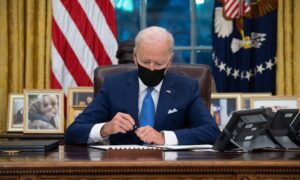 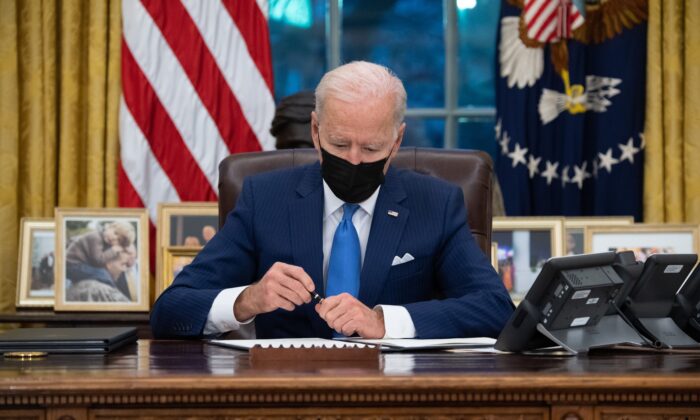 President Joe Biden has informed Congress that he’s rescinded the emergency declaration made by former President Donald Trump to fund construction of the wall on the southern U.S. border.

“I have determined that the declaration of a national emergency at our southern border was unwarranted,” Biden said in a Feb. 10 statement. “I have also announced that it shall be the policy of my Administration that no more American taxpayer dollars be diverted to construct a border wall, and that I am directing a careful review of all resources appropriated or redirected to that end.”

“President Biden can pretend there’s no emergency at our southern border, but his policies are drawing surges of illegal aliens. Americans will pay the price for the President’s free and open borders,” he wrote on Twitter on Feb. 11.

Other Republican lawmakers criticized the administration for halting construction on the wall while ignoring the barbed wire fencing that surrounds the U.S. Capitol.

“The same Democrats who told you we don’t need a wall at the southern border, won’t take the wall down protecting them at the US Capitol,” Rep. Jodey Arrington (R-Texas) wrote on Twitter.

Hours after becoming president on Jan. 20, Biden signed Presidential Executive Order (EO) 10142, in which he declared that “building a massive wall that spans the entire southern border is not a serious policy solution,” describing the project as “a waste of money that diverts attention from genuine threats to our homeland security.”

Meanwhile, 50 Republican Congress members sent a letter to Biden on Feb. 9 asking him to reverse his Jan. 20 executive order on immigration and border security. Rep. Liz Cheney (R-Wyo.), who signed the letter, said there is a crisis brewing at the southern border.

“Based on information from sources on the ground, this week Customs and Border Protection (CBP) agents have seen the average daily flow soar to more than 3,500 migrants, up from 2,000 earlier last month,” the letter says (pdf).

In contrast, Speaker of the House Nancy Pelosi (D-Calif.) previously called Trump’s border wall effort “ineffective” and said the routing of military funds to the project as “wasteful.”

After Biden signed his immigration EO on Jan. 20, Rep. Linda T. Sánchez (D-Calif.) announced she will lead the House’s legislative efforts on immigration reform, along with a group of her colleagues she called “The Closers.”

“On Day One of the Biden administration, we’re wasting no time. We are getting to work and we will get this done,” Sánchez said in a statement.

“In working with President Biden, ‘The Closers’ and I will: prioritize a path to citizenship for the millions of people seeking home and refuge in this country, treat our undocumented population humanely, restore family unity, and work to mitigate the root causes of migration,” she added.