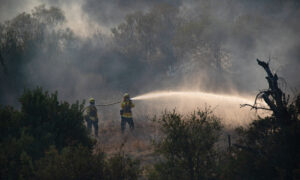 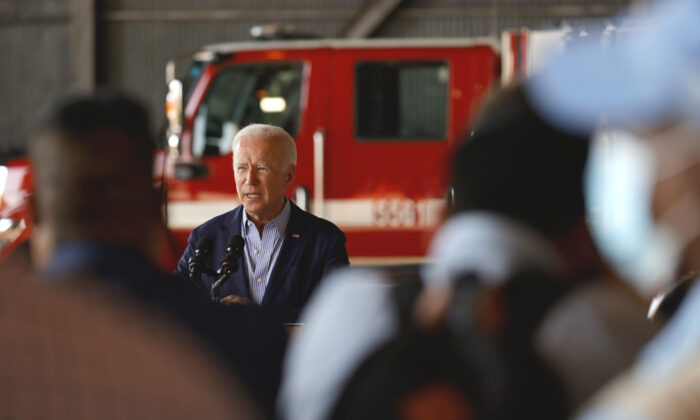 President Joe Biden traveled to the West Coast on Monday to meet with state and local officials at sites affected by recent wildfires.

Multiple blazes in northern California have burned millions of acres and thousands of structures this fire season. The state says it is currently dealing with 15 large fires.

And challenging fire conditions are expected to endure for at least several more weeks. Forecasters expect above-average fire activity over the next two months in Northern California, the Pacific Northwest, and the Northern Rockies.

“These fires are blinking code red for our nation,” said Biden in an address in Sacramento County, California held after the president observed damage from the Caldor Fire from Marine One. “They’re gaining frequency and ferocity and we know what we have to do.”

Earlier in the day, Biden stopped in Boise, Idaho for a briefing from federal and state fire agency officials at the National Interagency Fire Center (NIFC). There he was told by Grant Beebe, the assistant director of the Bureau of Land Management’s Office of Fire and Aviation, that record fires are “teaching us that we maybe need to change the way that we’re doing business.”

Biden is using the trip to push his $1 trillion dollar infrastructure bill as well as his massive $3.5 trillion spending plan. He visited sites on the East Coast affected by flash flooding last week to deliver a similar message.

“[The spending plan] literally provides for billions of dollars for wildfire preparedness, resilience and response, forest management and public water sources,” said Biden Monday—as he continued to make the case that the bills will help mitigate the effects of climate change.

“It’s not a Democrat thing; it’s not a Republican thing,” he said. “It’s a weather thing. It’s a reality. It’s serious.”

Biden says extreme weather cost the nation about $99 billion last year and even more cost is expected this year.

As of last week, roughly 44,000 wildfires have burned more than 5 million acres of federal, state, local, tribal, and private lands this year—about 200,000 more than this time last year. On July 14th, the National Wildland Fire Preparedness Level (PL) was raised to level 5 (of 5). This was the earliest we reached PL5 in the past 10 years, and as of next week, it will also be the longest period of continuous-time that it has remained at that highest level.

Biden approved a Presidential Major Disaster Declaration last month to provide California with federal support to combat the Dixie, McFarland, Antelope, Monument, and River fires. The Caldor fire was added to the list over the weekend. Officials say it is about 65 percent contained.

Biden also used the Defense Production Act in August to assist with the production of firehoses. The funding helped an Oklahoma City nonprofit called NewView Oklahoma produce and ship 415 miles of firehoses.

Chair of the National Association of State Foresters Wildland Fire Committee George Geissler spoke to the president Monday on the informal collaborative efforts between state and federal firefighting agencies who regularly assist one another on fires outside of their respective jurisdictions.

“[The threat of wildfires] really demands national attention, and it needs to be unified, it needs to be multifaceted,” said Geissler. “It needs to take on prevention, mitigation, response, and recovery.”

The trip marks Biden’s first official visit to the West Coast as president. The tour also includes a stop later in the day in Long Beach to campaign for California Democratic Gov. Gavin Newsom, who faces a recall vote on Tuesday. Biden will visit Denver, Colorado on Tuesday to visit the National Renewable Energy Laboratory.