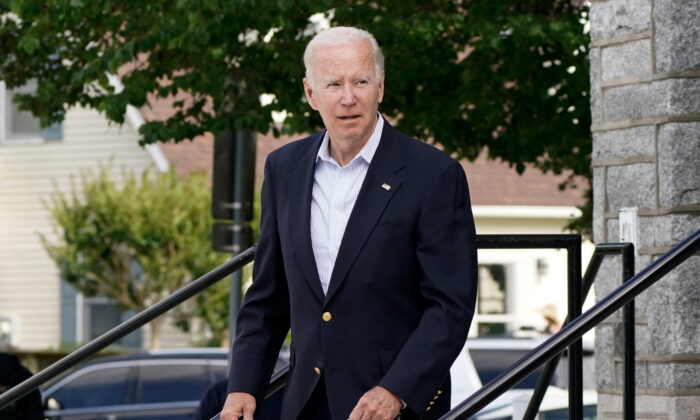 Biden Still Positive for COVID-19 as He Deals With Pfizer Drug ‘Rebound’: Doctor

President Joe Biden again tested positive for COVID-19 on Monday due to a “rebound” of “positivity” sparked by the drug Paxlovid, according to his doctor in an update.

Biden, 79, tested positive on Monday morning for the third day in a row, White House physician Kevin O’Connor wrote in a letter (pdf) to press secretary Karine Jean-Pierre. Last week, he returned a negative COVID-19 test as he was taking Paxlovid, which is known to cause a recurrence of symptoms after a negative test.

“Given his rebound positivity, which we reported Saturday, we continued daily monitoring,” he said. “This morning, as could be anticipated, his SARS-CoV-2 antigen testing remained positive.”

Biden, who has received four vaccine doses, will continue to be under strict isolation for now, O’Connor said.

While O’Connor said Biden had no symptoms, the White House told reporters later on Monday that his symptoms are “mild.”

Last week, the president briefly emerged from quarantine following a negative test, delivering remarks at the White House Rose Garden. The White House has not confirmed whether any staffers contracted COVID-19.

Per Centers for Disease Control and Prevention (CDC) guidelines, Biden has to quarantine for at least five days after testing positive for the virus.

Over the weekend, the White House told reporters via the press pool that Biden will not embark on a scheduled trip to Saginaw County, Michigan. It’s not clear whether the trip will be rescheduled.

Health officials and Pfizer have said Paxlovid rebound impacts a small number of recipients, although White House adviser Anthony Fauci also experienced it several weeks ago. Fauci confirmed that he tested negative for four days before testing positive as he took the drug, which was first handed an emergency use authorization by the Food and Drug Administration in late 2021.

Pfizer’s clinical trial suggested there is a 1 to 2 percent chance of a COVID-19 rebound case linked to Paxlovid. Last month, White House COVID-19 czar Ashish Jha said there’s a 5 percent chance while stressing that “when people have rebound, they don’t end up in the hospital” and “don’t end up particularly sick.”

“If you look at Twitter, it feels like everybody has rebound,” Jha said. “But it turns out there’s actually clinical data.”

But with Biden’s recurrent positive test, some scientists have speculated that data showing only a small number of Paxlovd recipients experience the so-called “COVID rebound” is outdated.

Dr. Jonathan Reiner, a prominent cardiologist and professor of medicine at George Washington University Hospital, said in a Twitter post over the weekend that he believes that Pfizer-associated rebound cases are actually quite common.

“The prior data suggesting ‘rebound’ Paxlovid positivity in the low single digits is outdate[d] and with BA.5 is likely 20-40 percent or even higher,” Reiner wrote.