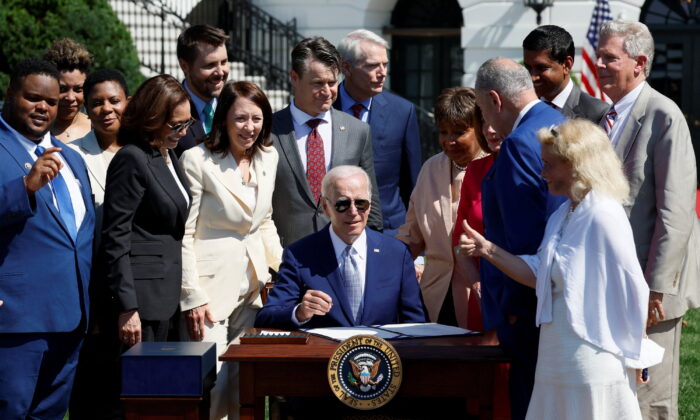 U.S. President Joe Biden signs the CHIPS and Science Act of 2022 alongside Vice President Kamala Harris, House of Representatives Speaker Nancy Pelosi, and Joshua Aviv, founder and CEO of SparkCharge, on the South Lawn of the White House in Washington, on Aug. 9, 2022. (Evelyn Hockstein/Reuters)
Policies & Impacts

President Joe Biden signed an executive order on Aug. 25 to direct the implementation of the $280 billion CHIPS Act, designed to boost domestic manufacturing and research related to semiconductors.

The order will start the flow of cash to companies such as Intel, which will now begin to build fabrication sites in the United States.

“The Act … will make transformative investments to restore and advance our Nation’s leadership in the research, development, and manufacturing of semiconductors,” an associated White House statement released on Aug. 25 states.

The statement also said that the funds would reduce “dependence on critical technologies from China and other vulnerable or overly concentrated foreign supply chains.”

Of the $280 billion in funding that the bill allots, some $52 billion will directly go to companies in the form of subsidies, while the remainder will provide for corporate tax breaks, research, and social programs.

To that end, the executive order established a Steering Council co-chaired by presidential advisers to coordinate the bill’s associated policy development and to ensure effective implementation.

Biden signed the CHIPS and Science Act on Aug. 9, allocating a $280 billion funding package toward boosting domestic semiconductor manufacturing and various research endeavors. But the executive order will begin the process of implementing the funding.

“The CHIPS and Science Act will boost American semiconductor research, development, and production, ensuring U.S. leadership in the technology that forms the foundation of everything from automobiles to household appliances to defense systems,” a White House fact sheet on the law stated.

“The law will also ensure the United States maintains and advances its scientific and technological edge.”

After the $52 billion for manufacturing and related expenses, much of the remainder of the funds will go toward tax breaks for major tech corporations, green energy initiatives, and research grants for the administration’s various social equity projects.

The law will also grant billions toward investments in “disadvantaged communities” to ensure that semiconductor manufacturers “support equitable economic growth and development.”

Likewise, the White House said it would spend substantial sums to conduct research at historically black colleges and combat “gender-based harassment in the sciences.”

The first priority for the Steering Council listed in Biden’s executive order is compliance and oversight. Meanwhile, “meeting economic, sustainability, and national security needs” is second.

Despite the buzz surrounding the bill, critics from both sides of the aisle denounced the expenditure as a corporate handout that would increase inflation and hurt U.S. taxpayers.

“The question that we should be asking is this,” Sen. Bernie Sanders (I-Vt.) said while debating the bill. “Should American taxpayers provide the microchip industry with a blank check of over $76 billion at the same exact time when semiconductor companies are making tens of billions of dollars in profits and paying their CEOs exorbitant compensation packages?”

“I think the answer to that is a resounding no.”