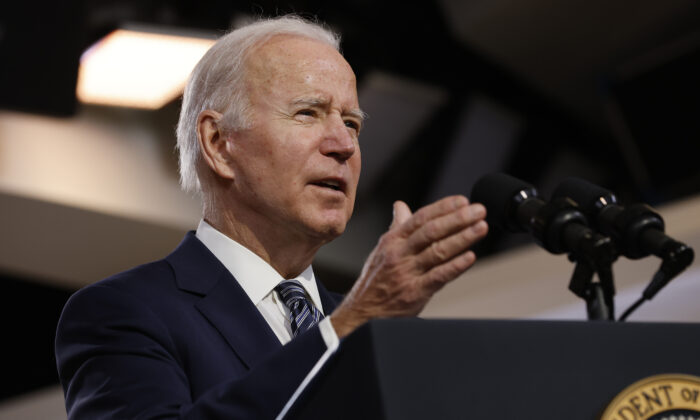 “The United States pays its debts when they are due. That’s why today, I signed a bill to fast-track the process to raise our debt limit,” Biden said in a statement.

The White House released a short video of the signing, which took place in the Oval Office. Reporters weren’t allowed to attend the signing.

The bill was approved by lawmakers in bipartisan fashion. Ten Republicans, including Senate Minority Leader Mitch McConnell (R-Ky.), joined with Democrats to approve the legislation in the upper chamber. One Republican, Rep. Adam Kinzinger (R-Ill.), who isn’t running for reelection, crossed the aisle to vote in favor of the bill in the House of Representatives.

The debt limit saga started in the fall, when Republicans for months refused to help Democrats raise the limit, arguing that, with majorities in both legislative chambers, they could use budget reconciliation or another tool to raise it without GOP assistance.

However, McConnell and 10 other Republicans joined Democrats in October to approve a temporary boost, to allow the government to continue borrowing through at least early this month.

“Republicans filled the leadership vacuum that has troubled the Senate since January. I write to inform you that I will not provide such assistance again if your all-Democrat government drifts into another avoidable crisis,” McConnell told Biden in a letter shortly thereafter.

The latest bill sets for one time the number of votes needed to raise the limit at a simple majority, instead of 60. Democrats control the 50–50 Senate because Vice President Kamala Harris, as president of the chamber, can cast tiebreaking votes.

Some Republicans took shots at GOP senators who helped Democrats pass the bill.

Sen. Mike Lee (R-Utah) said on the Senate floor last week that the bill “quite literally gives a blank check to President Biden and the Democrats.”

“The senators who gave that blank check don’t want you to know that they did it,” he said.

Sen. Jim Inhofe (R-Okla.) wrote on Twitter: “I could not vote for this debt limit workaround that would pave the way for funding Democrats’ radical socialist agenda and threaten the filibuster. This is only setting Democrats up to continue their tax and spending spree.”

Republicans who voted for the bill offered a different perspective.

“It was the right thing to do because the last thing in the world that this country needs is a default,” Sen. Lisa Murkowski (R-Alaska) said.

McConnell told reporters before the vote that the bill “is in the best interests of the country by avoiding default.”

“I think it is also in the best interest of Republicans,” he said.

Democrats touted the bill’s passage, with some asserting it shows that the filibuster, which sets a 60-vote threshold for most bills, can be removed.

“Today, the Senate made an exception to the filibuster to advance debt ceiling legislation, which is proof that we *can* pass voting rights legislation this Congress—regardless of the filibuster. To borrow from a popular gospel song: If we did it before, we can do it again,” Sen. Raphael Warnock (D-Ga.) said on Twitter.