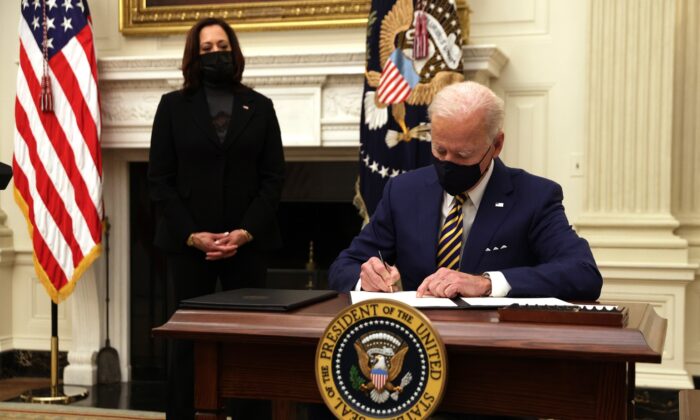 President Joe Biden on May 13 signed into law a measure in support of Taiwan’s proper access to the World Health Organization (WHO), according to the White House.

The bipartisan legislation S.812 (pdf) directs the U.S. secretary of state to develop a strategy to regain observer status for Taiwan at the World Health Assembly (WHA), the WHO’s decision-making body, seeking to boost the voice of the self-ruled island as the regime in Beijing continues its attempts to isolate and silence Taiwan on the world stage.

“Taiwan remains a model contributor to world health,” reads the legislation. “In 2020, after successfully containing the spread of the novel coronavirus within its borders while upholding democratic principles, Taiwan generously donated millions of pieces of personal protective equipment and COVID–19 tests to countries in need.

Introduced by Sen. Bob Menendez (D-N.J.), chairman of the Senate Foreign Relations Committee, the bill passed the Senate with “unanimous consent” last August, before the House approved it 425–0 in late April, sending the measure to the White House for Biden’s signature.

Menendez and Sen. Jim Inhofe (R-Okla.), co-chairman of the Senate Taiwan Caucus, applauded the president’s signing of the legislation, which comes about a week before delegations from all WHO member states are due to attend this year’s WHA meeting, beginning on May 22 in Geneva.

“As Beijing’s aggressive stance toward Taiwan continues to intensify, the United States is once again demonstrating our commitment to ensuring Taiwan’s presence on the international stage,” Menendez said in a statement.

Inhofe said that Taiwan’s observer status “must” be restored.

“We are one step closer to that goal,” he said. “Given China’s continued malicious behavior, we cannot allow them to refuse Taiwan a seat at the table any longer.”

Taiwan’s Foreign Ministry expressed its thanks in response to the “bipartisan, bicameral support” from Washington.

Fifty years ago, Taiwan, officially known at the time as the Republic of China (ROC), was expelled from the WHO after the globalist United Nations switched its recognition to the communist People’s Republic of China from the liberal democratic ROC. The Chinese Communist Party considers the island a breakaway province despite it never having been ruled by the Party.

Taiwan took part in the annual WHA as an observer from 2009 to 2016, yet has since been stripped of that status because of Beijing’s opposition after President Tsai Ing-wen won the 2016 election. The ruling Democratic Progressive Party under her leadership views Taiwan as a de facto nation.

Taiwanese authorities had rejected China’s main condition for its WHO participation as an observer—acceptance that it is part of China—before a previous meeting held during the pandemic.

Taiwan Foreign Minister Joseph Wu said last week that his ministry was “proactively striving” for an invite to attend the WHA meeting.