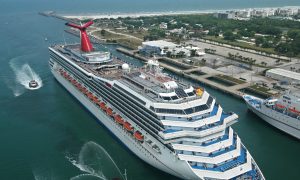 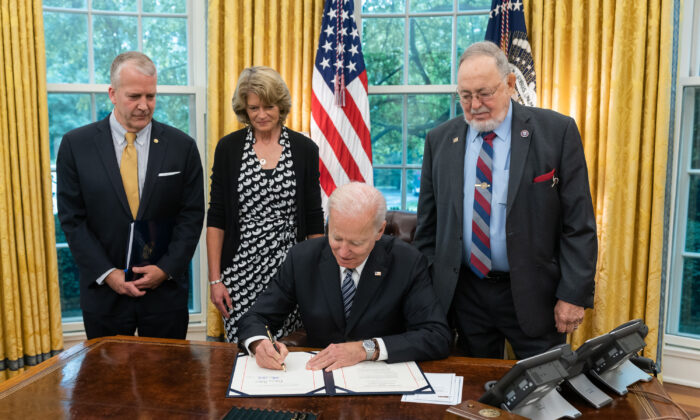 President Joe Biden has signed into law a bill that lets cruise ships sail directly from Washington State to Alaska without having to dock in Canada, opening the door for cruise lines to resume cruises to Alaska after a pandemic-driven stoppage.

The White House announced on Monday that Biden had signed H.R. 1318, or the “Alaska Tourism Restoration Act,” which temporarily allows foreign-flagged cruise ships to sail directly to Alaska until March 31, 2022, or until Canada lifts its pandemic-related restriction prohibiting cruise ships from docking in its waters, whichever date comes first.

Biden signing the bill into law was an expected move, with three Carnival Corporation lines—Princess Cruises, Holland America Line, and Carnival Cruise Line—as well as Norwegian Cruise Line vessel Norwegian Bliss, last week announcing that they were poised to set sail to Alaska in July, after Congress passed the legislation. Without the bill, large cruise ships sailing to Alaska would not have been able to sail there this summer.

Attending the signing ceremony at the White House were Sens. Lisa Murkowski (R-Alaska) and Dan Sullivan (R-Alaska), and Rep. Don Young, (R-Alaska), all of whom championed the bill as it cleared Congressional hurdles before landing on the president’s desk for a signature.

“For over a year and a half many Alaskan communities who rely solely on tourism have been completely cut off from business due to COVID-19 restrictions,” Murkowski said in a statement. “The Alaska Delegation has worked for months to try to find opportunities to provide a safe path forward for Alaskans—to help salvage what is left of the 2021 tourism season. Together, with the support of so many Alaskans, there is now a light at the end of a long, dark tunnel,” she added.

“This summer will not be the robust cruise ship season we have had in previous years, or was forecasted this year before the pandemic hit, but there will be ships, and there will be people, and that is excellent for Alaska,” Sullivan said.

“Until now, families in Southeast have been kept awake at night from stress, driven by the uncertainty surrounding the upcoming season,” Young said. “With the President’s signature on our bill, Canada’s port closure—which prevented cruise lines from being compliant with the PVSA—will no longer prevent our mom-and-pop businesses from doing what they do best: welcoming tourists, growing our economy, and keeping Alaska the world-class destination that it is,” he added.

After Congress passed the bill and reports indicated Biden would sign it, Carnival Corporation announced in a release that Princess Cruises, Holland America Line, and Carnival Cruise Line are expected to return to service in the United States starting in July with Alaska sailings departing from Seattle.

The cruises are open to guests who have had their final dose of an approved COVID-19 vaccine at least two weeks before cruise departure.

“Crew vaccinations will be in accordance with CDC guidelines,” Carnival said in the release. Arnold Donald, CEO of Carnival Corporation, said in a statement that, “As we continue to work with the CDC on requirements for sailing in the United States, we remain committed to returning to service in a way that serves the best interest of public health.”

“We remain optimistic that by working with the CDC and local port and government authorities in the destinations we visit that we will be able to resume safe cruising in the U.S. this summer,” a Norwegian Cruise Line spokesperson told Alaska’s News Source this week. “As such, we have opened for sale voyages on Norwegian Bliss to be scheduled for August until the end of the season.”