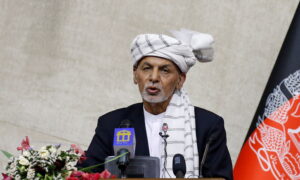 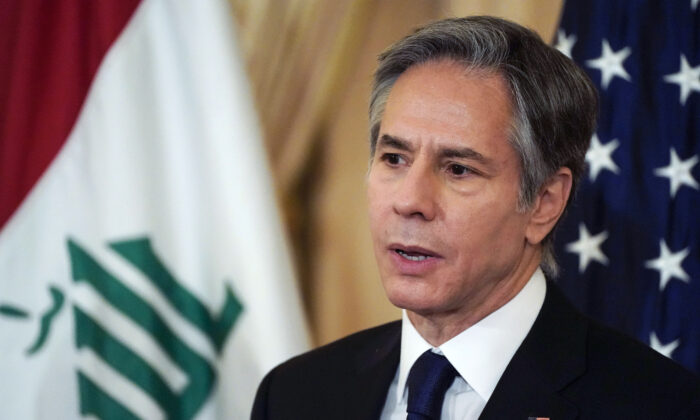 Secretary of State Antony Blinken speaks as he and Iraq's Foreign Minister Fuad Hussein face reporters as they meet at the State Department in Washington, on July 23, 2021. (Elizabeth Frantz/Pool via AP)
Asia & Pacific

Biden Secretary of State: US Embassy Staff Being Evacuated in Kabul

Secretary of State Antony Blinken said on Aug. 15 that the United States is evacuating its personnel from the embassy in Kabul, Afghanistan, although he didn’t say whether the embassy would be closed.

“We are working to make sure that our personnel are safe and secure,” Blinken said during an ABC News interview. “We’re relocating the men and women of our embassy to a location at the airport. It’s why the president sent in a number of forces, to make sure that as we continue to draw down our diplomatic presence, we do it in a safe and orderly fashion.”

Taliban forces surrounded Kabul over the weekend, and the Afghan government and Taliban both confirmed on Aug. 15 that talks are being held to transfer power peacefully. In about a week, the terrorist group took over much of the country, seizing numerous provincial capitals as the Afghan army surrendered en masse in many locations.

When asked on the ABC News segment about whether the U.S. Embassy would be shut in its entirety, Blinken didn’t give a direct answer.

Although the United States has long sought to remove its presence from the South Asian country after invading shortly after the Sept. 11, 2001, terrorist attacks, the swift advances made by the Taliban on Kabul have been likened to the fall of Saigon, when Vietnamese communists took over the country in 1975, providing a number of enduring images of embassy staff evacuating the country by helicopter.

“Let’s take a step back. This is manifestly not Saigon,” Blinken told ABC News, pushing back against the comparison. The invasion of Afghanistan, he added, succeeded in taking out Osama bin Laden and reducing the capacity of the al-Qaeda terrorist group.

The fact that the United States killed bin Laden, who has been accused of being a chief orchestrator of the Sept. 11 attacks, “should ring out very strongly,” Blinken later said.

Late on Aug. 15 local time, the Taliban issued an online statement saying the terrorist fighters were ordered to enter Kabul.

“Taliban fighters are to be on standby on all entrances of Kabul until a peaceful and satisfactory transfer of power is agreed,” a Taliban spokesman had said earlier in the day.

American diplomats were seen being evacuated from their embassy by helicopters after a swift advance by the terrorists.

President Joe Biden on Aug. 14 authorized the deployment of 5,000 U.S. troops to help evacuate citizens and ensure an “orderly and safe” drawdown of military personnel. That amounts to 1,000 more personnel than originally had been announced, according to a Pentagon official.

The State Department confirmed to The Epoch Times on Aug. 13 that it also directed staff to destroy sensitive documents and other materials ahead of the Taliban’s advance.