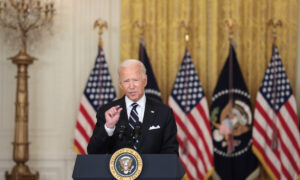 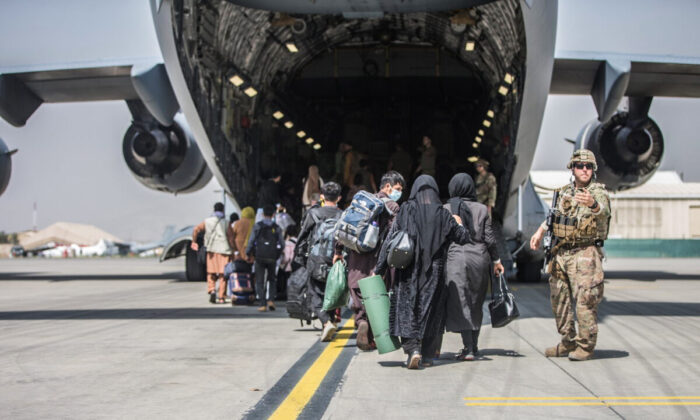 Biden Says US On Track for Getting Americans out of Afghanistan by Aug. 31

President Joe Biden said during a press conference on Tuesday that the United States is on pace to complete the Afghanistan evacuation mission by the Aug. 31 deadline as long as the Taliban continues to cooperate.

“We are currently on a pace to finish by Aug. 31. The sooner we can finish, the better. Each day of operations brings added risk to our troops, but the completion by Aug. 31 depends upon the Taliban continuing to cooperate and allow access to the airport for those who are transporting out, and no disruptions to our operation,” said Biden.

Biden said he is asking his team for contingency plans, should the deadline need to be extended, but emphasized that it is his preference that U.S. troops leave on Aug. 31 because staying longer puts them in danger from terror attacks from ISIS-K.

“In addition, I’ve asked the Pentagon and the State Department for contingency plans to adjust the timetable, should that become necessary. I’m determined to ensure that we complete our mission, this mission,” Biden said, adding, “I’m also mindful of the increasing risks that I’ve been briefed on, and the need to factor those risks in. They’re real and significant challenges that we also have to take into consideration. The longer we stay, starting with the acute and growing risk of an attack by a terrorist group known as ISIS-K.”

Biden said ISIS in Afghanistan is also an enemy of the Taliban, and each day increases the risk of U.S. and allied forces being targeted by the terrorist group.

The White House press secretary confirmed that 57,000 people had been transported out of Afghanistan and that the evacuation effort will stay at the same speed, but troops will need to start drawing down before the Aug. 31 deadline, if that date is adhered to. Pentagon spokesperson John Kirby said the deadline could be extended, but the president would make that decision based on all relevant information at that time.

Some Democrat lawmakers have voiced their concern for the Aug. 31 deadline, while Republicans have more decisively opposed the deadline and that date being dictated by the Taliban.

Rep. Jason Crow (D-Colo.) told reporters at a press conference on Tuesday that he does not believe the deadline for ending the evacuation mission should be dependent on what the Taliban wants but understands the complicated nature of the mission.

“My understanding is that the military is doing what the military always does, and that is perform contingency planning for all possible scenarios including a presence beyond Aug. 31. I think that process is ongoing. In addition to that, the State Department continues to engage with the Taliban and discussions about an extension of that deadline,” said Crow. “I don’t think that our presence beyond Aug. 31 should be contingent on agreement with the Taliban, but it’s obvious that an agreement with the Taliban would be preferred and would reduce the risks, and we should continue to try to achieve that.”

Republican House members also held a press conference on Tuesday and made it clear that all U.S. citizens and allies must be airlifted out of Afghanistan, and the Aug. 31 deadline will not suffice. Rep. Jake Ellzey (R-Texas) said there cannot be a timeline for evacuating citizens and allies from Afghanistan.

“We’re talking about a military mission here. Nobody can put a date on the accomplishment or the completion of a successful military mission. There’s no arbitrary date. The mission is complete when the mission is complete. And if the Taliban harms a hair on an American’s head, all those aircraft and those aircraft carriers, those AC-130s, we will rain Hellfire down on you until all Americans are out, and that’s what this administration needs to be saying,” Ellzey said.

House Minority Leader Kevin McCarthy (R-Calif.) said that the House should pass a resolution that states the Aug. 31 should be extended until the evacuation mission in Afghanistan is complete.