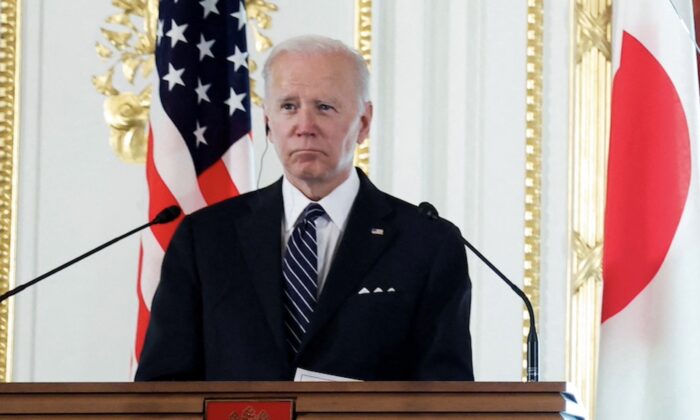 President Joe Biden said on May 23 that his administration is “considering” removing some Trump-era trade tariffs currently imposed on China as a measure designed to help reduce pressures from record inflation in the United States.

Biden, on his first trip to the Indo-Pacific region as president, arrived in Japan on May 22 after visiting South Korea. His goal was to assert “American leadership in the vital region” while sending a “powerful message” to China.

During a press briefing with Japanese Prime Minister Fumio Kishida, Biden said discussions on the possibility of lifting China trade tariffs were ongoing.

“I am considering it. We did not impose any of those tariffs. They were imposed by the last administration, and they’re under consideration,” he told reporters.

Former U.S. President Donald Trump imposed up to 25 percent tariffs on China in 2018 to combat what he called unfair trade practices by the Chinese regime. Beijing also imposed tariffs on Washington in a retaliatory move.

U.S. Treasury Secretary Janet Yellen said on May 18 that some of the tariffs imposed by the Trump administration “aren’t very strategic” in the sense of addressing unfair trade practices, national security issues, and supply chain vulnerabilities.

Yellen also said the tariffs imposed on China appear to be causing more harm to U.S. consumers and businesses, despite acknowledging the “variety of valid concerns” made about the China tariff removal.

“I see a case, not only because of inflation, but because there would be benefits to consumers and firms from some of the tariffs, that some relief could come from cutting some of them. But we’re having these discussions. There are a variety of impacts,” she told reporters.

Commenting on the matter, Sen. Bill Hagerty (R-Tenn.) said removing the China trade tariffs would take away “the only leverage that we’ve got in place right now to bring China to more normalized trade relations.”

“China laughs all the way to the bank on that. If you look at our energy policies here in America, just broadly speaking, it’s a huge benefit to China,” he told Fox Business.

Hagerty, who served as U.S. ambassador to Japan between 2017 and 2019, said there was no “rampant inflation” following the implementation of the tariffs, but that Washington had leverage.

“I can understand why Katherine Tai, the current [U.S.] trade representative, doesn’t want to do this. It’s just another gimmick that the Biden administration is pursuing. And again, a net benefit to China,” he said.

On May 3, the U.S. trade representative’s office (USTR) issued a federal register notice that it was commencing a statutory process required leading up to the four-year anniversaries of the initial “Section 301” tariffs imposed on Chinese imports.

The review process will involve collecting comments from domestic industries that have benefitted from the tariff action.

“If one or more requests for continuation are submitted, USTR will publish an additional notice after July 6 announcing the continuation of the tariff action and will proceed with a review of the tariffs,” the notice reads.