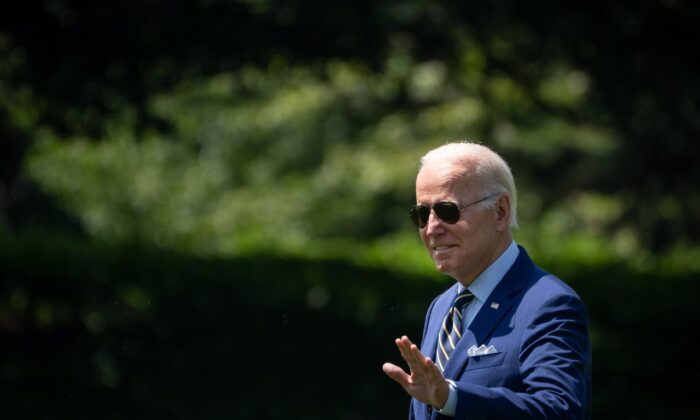 President Joe Biden waves as he walks to Marine One on the South Lawn of the White House on July 20, 2022. (Drew Angerer/Getty Images)
US-China Relations

President Joe Biden expressed that either he or the military may be opposed to a reported trip by House Speaker Nancy Pelosi to Taiwan, the self-ruled island that Beijing views as its own.

“Well, I think that—the military thinks it’s not a good idea right now, but I don’t know what the status of it is,” Biden said of the trip after arriving at Joint Base Andrews in Maryland on July 20.

The parsing of the sentence made it unclear whether Biden himself believed it was a bad idea for Pelosi to visit Taiwan based on military intelligence, or if he was merely repeating warnings given to him by military leadership.

The remarks were made one day after the Chinese Communist Party (CCP) threatened to implement “forceful measures” against the United States if Pelosi visited Taiwan.

The Chinese regime, which has stridently worked to isolate Taiwan from the greater international order, has repeatedly condemned the efforts of U.S. lawmakers to interact with Taiwan’s government.

Lawmakers and foreign policy experts alike took to social media to push back against the president’s apparent overreach in appearing to pressure Pelosi not to take the trip.

“Speaker Pelosi and I don’t see eye to eye on much,” Rep. Tom Tiffany (R-Wis.) wrote in a tweet, “but she doesn’t need permission from POTUS or China to visit our friends in Taiwan.”

“This undercuts Pelosi’s trip,” said Michael Sobolik, a fellow at the American Foreign Policy Council. “If there’s a substantive reason not to go, communicate those concerns in private. Don’t do this in public—it only hurts Taiwan.”

Pelosi was widely expected to visit Taiwan with other lawmakers in April but was reported to have developed COVID-19 at the time. It has been rumored that the House would conduct that visit soon, but neither the State Department nor Pelosi’s office has confirmed such a trip.

The United States’ relationship with Taiwan is perhaps the most volatile subject in its diplomatic relations with communist China, as the CCP claims that Taiwan is a breakaway Chinese province.

Despite such claims, the democratic Taiwan has been self-governed since 1949 and has never been controlled by the CCP. Additionally, the Taiwan Relations Act of 1979 guarantees that the United States will provide Taiwan with the arms necessary to defend itself from foreign aggression.

CCP General Secretary Xi Jinping has vowed to unite Taiwan with the mainland and hasn’t ruled out the use of force to do so. Moreover, senior U.S. military leadership believes that a CCP invasion of the island could come as soon as 2027.

CCP leadership has become increasingly bellicose in its efforts to push international support for Taiwan’s de facto independence away, and a Chinese general in June went so far as to threaten U.S. Defense Secretary Lloyd Austin with war over the Taiwan issue, “no matter the cost.”

Notably, Biden’s remarks on Pelosi’s trip came the same day that the Republican-led China Task Force was meeting with Taiwan’s ambassador to the United States. During that meeting, House Minority Leader Kevin McCarthy denounced the CCP for its threats and said the United States must do more to arm Taiwan.

“The CCP has shown itself to be a ruthless, aggressive, and evil dictatorship,” McCarthy said. “We cannot underrate its goal to control through force and brutality.

“Supporting Taiwan is right and it is in America’s best interest.”

Pelosi declined to discuss whether she had planned to visit Taiwan at a press event on July 21, saying that privacy on the matter was a matter of security.

“I am not going to discuss my travel plans,” Pelosi said. “It’s a security issue, so I won’t be discussing that now.”

The House speaker did say, however, that China–Taiwan relations were a “major issue” that needed to be addressed. The United States, she said, should support Taiwan but also clearly acknowledge that neither the administration nor Congress had promoted Taiwan independence per ser.

Pelosi said that she hadn’t spoken with Biden about the meaning of his comments, but speculated that he may have been referencing the potential for violence amid China’s mounting aggression in the skies around Taiwan.

“I think what the president was saying is that maybe the military was afraid our plane [would] get shot down or something like that by the Chinese,” Pelosi said. “I don’t know exactly. I didn’t see it. I didn’t hear it.”

This article has been updated to include Pelosi’s comments on July 21.