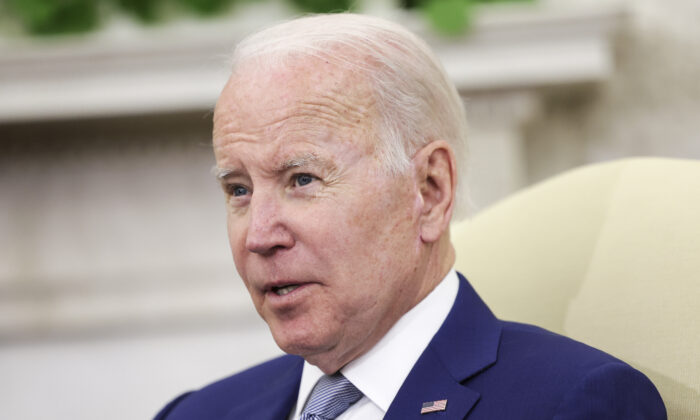 U.S. President Joe Biden speaks during a meeting with Federal Reserve Chairman Jerome Powell and Treasury Secretary Janet Yellen, in the Oval Office at the White House in Washington on May 31, 2022. (Kevin Dietsch/Getty Images)
Executive Branch

President Joe Biden said Friday he has “no direct plans” to head to Saudi Arabia though he left open the door for a future trip, as rumors swirl around a possible visit to discuss global oil supply and mend strained Washington–Riyadh relations.

Biden made the remarks during a June 3 press conference in Delaware, where he was asked if he’s going to go to Saudi Arabia.

“I’m not sure whether I’m going,” Biden replied. “I have no direct plans at the moment. We’re looking at it.”

He said that “there is a possibility that I would be going to meet with both the Israelis and some Arab countries,” adding that he expects “Saudi Arabia would be included in that if I did go.”

Biden was then asked by a reporter whether he still considers Saudi Arabia to be a “pariah,” which is how he described the Kingdom while on the presidential campaign trail, in context of the killing of journalist Jamal Khashoggi in the Saudi Consulate in Istanbul.

“Look, I’m not going to change my view on human rights,” Biden replied. “But as president of the United States, my job is to bring peace if I can … and that’s what I’m going to try to do.”

During the press conference in Delaware, a reporter asked Biden whether he’d be open to meeting with the crown prince if he did end up going to Saudi Arabia.

“Look, we’re getting way ahead of ourselves here. What I want to do is see to it that we diminish the likelihood that there’s a continuation of this … some of the senseless wars between Israel and the Arab nations. And that’s what I’m focused on,” Biden replied.

The prospect of a Biden visit to Saudi Arabia has been rumored for some time, with Axios reporting in March that some of the president’s advisers were privately discussing a possible trip in the spring to help repair ties between Washington and Riyadh, and to persuade the Kingdom to pump more oil.

At the time, a White House spokesperson downplayed the rumors, telling Axios that “a lot of this is premature speculation.”

More speculation about a Biden trip to Riyadh was fueled after the OPEC+ alliance of oil-producing countries—an organization chaired by Saudi Arabia—recently agreed to boost oil production after months of prodding by the White House to pump more oil in a bid to quell soaring gasoline prices.

Citing “sources familiar with the process,” Reuters reported that Biden was planning a trip to Saudi Arabia in late June, with the visit to coincide with a trip to Europe and Israel.

Later, citing anonymous senior officials in the Biden administration, NBC reported that the White House had postponed plans for a June trip and that Biden’s visit to Saudi Arabia would likely take place in July.

Those same officials, however, told NBC that the plans were in flux and subject to change.

While the U.S. State Department describes U.S.-Saudi relations as “strong” and “close,” the Wall Street Journal reported that ties between the two countries were at “breaking point,” citing Biden’s “pariah” remarks, Riyadh’s unwillingness to bow to Washington requests to pump more oil, and the overhang of Khashoggi’s killing.

The outlet described a supposedly tense exchange between the crown prince and Biden’s national security adviser, Jake Sullivan, in which Sullivan allegedly asked bin Salman about the journalist’s slaying. The crown prince reportedly responded by shouting at Sullivan, demanding no more talk of Khashoggi and telling the adviser to forget any oil production boosts.

After that article was published, a Saudi official rejected the Wall Street Journal’s characterization of that meeting, telling the outlet that the discussion between Sullivan and the crown prince was respectful and cordial, while denying that relations between their respective nations were strained.

“Over the course of the last 77 years of Saudi-U.S. relations, there have been many disagreements and differing points of view over many issues, but that has never stopped the two countries from finding a way to work together,” the official told the Wall Street Journal.

The two countries have strong economic and security ties, with the United States being Saudi Arabia’s second-largest trading partner.

The State Department says that the Kingdom “plays an important role in working toward a peaceful and prosperous future for the region and is a strong partner in security and counterterrorism efforts and in military, diplomatic, and financial cooperation.”