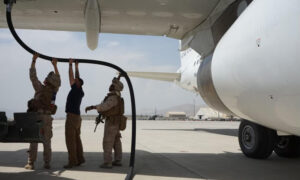 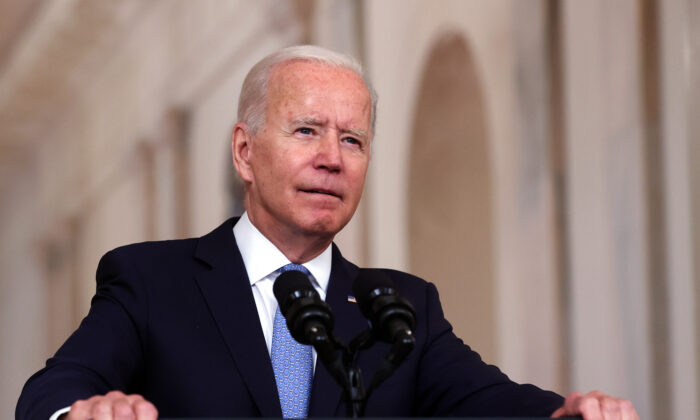 President Joe Biden delivers remarks on the end of the war in Afghanistan in the State Dining Room at the White House in Washington on Aug. 31, 2021. (Chip Somodevilla/Getty Images)
Executive Branch

Biden Says ‘No Deadline’ for Americans Still in Afghanistan

There’s no deadline for getting out the Americans who are still in Afghanistan after U.S. troops withdrew from the country, President Joe Biden said Tuesday.

Biden, speaking publicly for the first time since the withdrawal, called the evacuation mission “an extraordinary success” as he pointed to the thousands of Americans and tens of thousands of Afghans who were flown from Kabul on U.S. military or U.S.-facilitated flights.

He then turned to the estimated 100 to 200 Americans who are still in the Taliban-held nation, appearing to pin some responsibility on them.

“Since March, we reached out 19 times to Americans in Afghanistan with multiple warnings and offers to help them leave Afghanistan. All the way back as far as March,” he said while delivering remarks in Washington.

Most of the Americans who stayed behind are dual citizens “who had earlier decided to stay because of their family roots,” he added later.

“The bottom line: 90 percent of Americans in Afghanistan who wanted to leave were able to leave. And for those remaining Americans, there is no deadline. We remain committed to get them out if they want to come out,” he said.

White House press secretary Jen Psaki later told reporters in a press conference that Biden was referring to people who have roots in Afghanistan.

The Taliban terrorist group has said it will let Americans who want to depart the country leave and the United States will hold them to that commitment, U.S. officials have said.

Biden also said that evacuations could not have started sooner and that the Aug. 31 deadline was kept in place because top advisers, including Defense Secretary Lloyd Austin, claimed that withdrawing was the safest way to get the remaining Americans out.

Biden continued his penchant for not taking questions from reporters on Tuesday. He faces blowback from members of Congress, including Democrats, for sticking to his deadline.

“You sure as heck can’t abandon Americans in a war zone, leaving them to fend for themselves, and expect our enemies to respect us,” Rep. Brian Mast (R-Fla.) told reporters in Washington shortly before Biden spoke, alleging the president “has certainly allowed the reputation of the United States government to be burned down.”

Rep. Dan Crenshaw (R-Texas) said he urged the Biden administration “to go back on offense” and push back the “arbitrary surrender deadline,” but was ignored.

“The administration has to admit it is wrong. Stop running victory laps, like the arsonist claiming he did a good job putting the fire out, when there are still people inside,” he said.

“Leaving any American citizen behind is unacceptable, and I will keep pushing this administration to do everything in its power to get our people out,” Sen. Mark Kelly (D-Ariz.) added on Twitter.

Others, though, praised Biden for withdrawing the troops.

“Thanks to President Biden’s leadership, our military engagement in Afghanistan has finally come to an end,” Rep. Adam Smith (D-Wash.), chairman of the House Armed Services Committee, said in a statement.