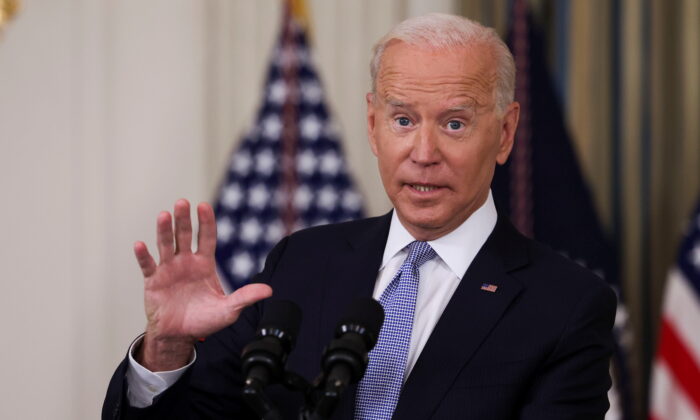 President Joe Biden on Sept. 27 received a Pfizer COVID-19 booster dose on camera to lobby support for the rollout of the third dose, while saying he’ll travel to Chicago soon to call on private employers to mandate vaccines.

“Boosters are important, but the most important thing we need to do is get more people vaccinated,” he said in remarks at the White House.

The president said he’s “moving forward with vaccination requirements wherever [he] can” and urged businesses to establish their own vaccine mandates.

“On Wednesday, I’ll be traveling to Chicago to talk about why it’s so important that more businesses are instituting their own vaccine requirements,” he said, before getting the booster.

A few weeks ago, Biden announced that he would issue an order directing the Occupational Safety and Health Administration (OSHA) to enforce a rule requiring workers at businesses with 100 or more employees to either submit to COVID-19 testing or get the shot. COVID-19 is the illness caused by the CCP (Chinese Communist Party) virus.

After Biden’s mandate announcement on Sept. 9, few details have emerged about the plan for private businesses, including how OSHA will enforce it. White House press secretary Jen Psaki, around the same time, said that businesses who don’t comply with the rule could face steep fines.

About two dozen GOP-led states have threatened lawsuits against Biden after his announcement. A lawsuit filed by Arizona Attorney General Mark Brnovich’s office said the mandate for private businesses would violate the 14th Amendment’s “equal protection clause” while noting that it would be unfair to impose such a mandate while illegal immigrants don’t have to get vaccinated to enter the United States.

The president also ordered federal health workers, federal contractors, and health care staff who work at Medicare- and Medicaid-funded hospitals to get vaccinated, with no exemptions. Last week, a group of federal workers, including a U.S. Secret Service member, filed a lawsuit against the Biden administration over the mandate, arguing that the Constitution grants them medical and religious exemptions.

Earlier this month, an advisory panel to the Food and Drug Administration (FDA) recommended that individuals aged 65 and older, as well as some high-risk people, get booster doses of the Pfizer vaccine. Later, the Centers for Disease Control and Prevention’s (CDC) advisory panel issued a similar recommendation and voted down recommending boosters for people between the ages of 18 and 64 who are at risk of contracting COVID-19 via their jobs or living situation.

Hours later, however, CDC Director Rochelle Walenksy overruled the CDC panel and recommended that 18- to 64-year-olds who work in jobs with high transmission rates get the Pfizer booster.

Should boosters be rolled out for more people and in other countries, analysts have estimated that vaccine makers Pfizer, Moderna, Johnson & Johnson, AstraZeneca, and others could make billions more in profits.

Morningstar analyst Karen Andersen told The Associated Press on Sept. 25 that she expects boosters alone to bring in about $26 billion in global sales next year for Pfizer and partner BioNTech, and boosters may bring in around $14 billion for Moderna if all Americans are recommended to receive them.