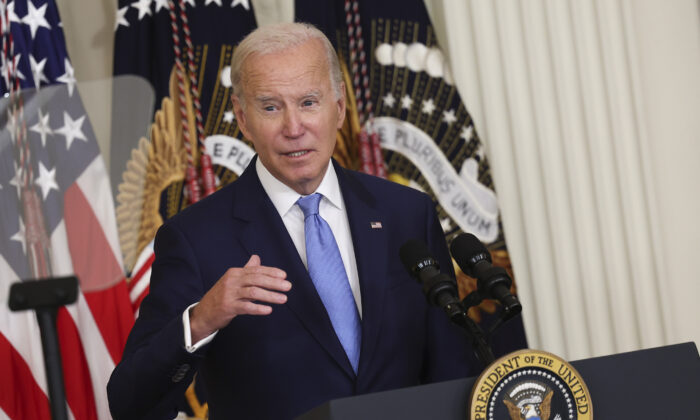 President Joe Biden downplayed the cost-of-living crisis that’s squeezing American households, arguing in a recent interview on CBS’s “60 Minutes” that inflation over the past several months “hasn’t spiked” and that the monthly rate of inflation was negligible.

Biden made the remarks in response to a question about soaring inflation posed by CBS’s Scott Pelley, who noted that the most recent Consumer Price Index (CPI) came in at an annual 8.3 percent and that Americans are “shocked by their grocery bills.”

Grocery store inflation—based on the so-called “food away from home” expenditure category in the CPI—shot up by an annual 13.5 percent in August, the fastest in 43 years.

Pelley then asked the president what he can do “better and faster” to bring down prices. Biden replied by calling for “perspective” and pointing out that the month-over-month rate of change of inflation was relatively small.

“The inflation rate month to month was just … an inch, hardly at all,” Biden said.

Overall, prices rose at a pace of 0.1 percent between July and August, according to the most recent data from the Bureau of Labor Statistics (BLS). The monthly pace of inflation was 1.0 percent in May, 1.3 percent in June, and 0.0 percent in July, BLS data show.

Biden bristled when pressed about the fact that the annual pace of inflation of 8.3 percent is running close to a multi-decade high.

“I got that,” Biden replied. “But guess what we are. We’re in a position where, for the last several months, it hasn’t spiked. It has just barely … it’s been basically even.”

The president added that bringing down inflation was going to be a “process” and vowed to “get control of inflation” eventually, including by adopting what he described as pro-growth economic policies like “growing entire new industries,” presumably in the clean-energy domain.

Meanwhile, at a Save America rally in Ohio on Sept. 17, former President Donald Trump said that inflation under Biden was going to get “a lot worse.”

“Under the Trump administration, we had the greatest economy in the history of the world, with no inflation,” Trump said at the Youngstown rally.

“Biden and the Democrat Congress created the worst inflation in 50 years, and that’s going to get a lot worse, because right after the election, when they stopped pumping the oil out of that beautiful strategic reserve that we had, millions and millions of barrels we pumped in, and now they’re pumping it out so that we can keep the prices down a little bit,” Trump said.

The former president also issued a warning regarding Democrats’ tax hikes and the impact on jobs.

“The radical Democrat Congress just passed one of the largest tax hikes in the history of our country, pulverizing the middle class,” Trump said. “It’s going to pulverize your jobs. Wait until you see the numbers starting to come out.”

A recent analysis by the Tax Foundation found that the Inflation Reduction Act would reduce long-run economic output by around 0.2 percent and eliminate some 29,000 full-time jobs in the United States. Over the long run, the measure would also reduce aftertax incomes for taxpayers across all income categories.

“By reducing long-run economic growth, this bill may actually worsen inflation by constraining the productive capacity of the economy,” the team of analysts at the Tax Foundation said in a statement.