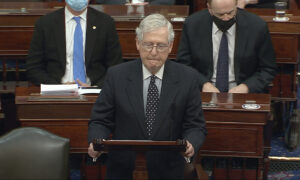 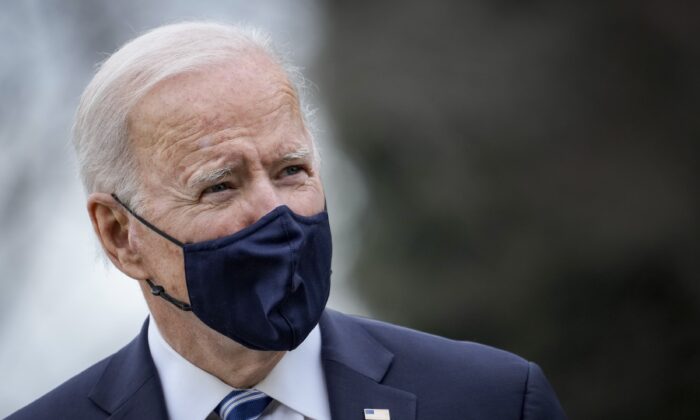 President Joe Biden stops briefly to talk to the press as he walks toward Marine One on the South Lawn of the White House in Washington, D.C., on March 16, 2021. (Drew Angerer/Getty Images)
Executive Branch

President Joe Biden signaled for the first time Tuesday that he backs changing rather than eliminating the filibuster rule, suggesting that it should be reformed to require lawmakers to talk on the Senate floor to delay the passage of a bill.

“I don’t think that you have to eliminate the filibuster,” Biden, who previously served in the Senate, said during an interview with ABC News’ George Stephanopoulos.

“You have to do what it used to be when I first got to the Senate, back in the old days. You had to stand up and command the floor, you had to keep talking … so you’ve got to work for the filibuster,” Biden said.

Asked if he endorses the return of the “talking filibuster,” which has been backed by a number of Democrats, the president said: “I am. That’s what it was supposed to be.”

“It’s getting to the point where, you know, democracy is having a hard time functioning,” Biden added.

The White House indicated earlier that it was Biden’s “preference” not to make changes to Senate filibuster rules, but that he was”open to hearing” ideas on the issue.

“He is also open to hearing ideas. And those discussions will happen in Congress. This is, of course, a Senate rule. It’s not a law that he would change or sign into law,” White House press secretary Jen Psaki told reporters earlier Tuesday.

While a number of Democrats, such as Sen. Joe Manchin (D-W.Va.), favor keeping the legislative filibuster, progressive groups are pushing for it to be scrapped.

Sen. Dick Durbin (D-Ill.) on Monday argued that the filibuster was damaging the nation’s democracy.

“Nobody serving in this chamber can even begin … to imagine what a completely scorched-earth Senate would look like,” he added, saying Republicans would require votes on all parliamentary moves, drastically slowing the pace of business.