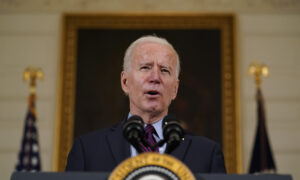 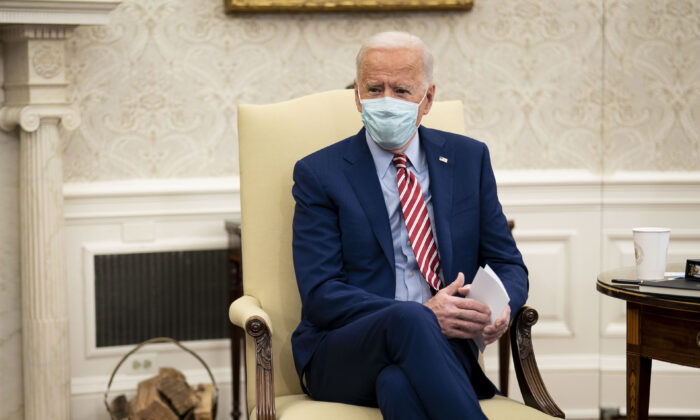 The two sides’ official statements about the call, which took place on Feb. 10, highlighted the leaders’ contrasting positions.

Meanwhile, Xi told the United States to “act prudently” on issues the Chinese regime deems its “internal affairs,” such as Hong Kong, Taiwan, and Xinjiang, according to a readout from the regime’s foreign ministry.

At an Oval Office meeting on Feb. 11, Biden told a bipartisan group of U.S. senators to discuss the need to upgrade U.S. infrastructure. He also said the United States must do more to respond to the China challenge.

“If we don’t get moving, they’re going to eat our lunch,” Biden said. “They’re investing billions of dollars and dealing with a whole range of issues that relate to transportation, the environment, and a whole range of other things. So we just have to step up.”

Biden also spoke of his long relationship with Xi: “I know him well. We spent a lot of time together over the years I was vice president.”

Xi was China’s vice chair, and thus Biden’s counterpart, at the time. The two had spent more than 24 hours in private meetings and 17,000 miles traveling together during that time, according to Biden.

The president has called the regime America’s “most serious competitor” and vowed to “out-compete” Beijing. This description has been echoed by Biden officials, who have refrained from casting the Chinese Communist Party (CCP) as an adversary, but rather as a major strategic competitor.

During the call, the two leaders also “exchanged views on countering the COVID-19 pandemic, and the shared challenges of global health security, climate change, and preventing weapons proliferation,” the White House readout stated.

“I told him I will work with China when it benefits the American people,” Biden wrote in a Feb. 10 tweet.

Meanwhile, according to the Chinese foreign ministry’s readout, Xi told Biden that confrontation would be a “disaster,” and urged the two sides to re-establish dialogue channels to “avoid misunderstanding.”

The Chinese leader has maintained a hard line regarding Hong Kong, Xinjiang, and Taiwan, which Xi told Biden were matters of “sovereignty and territorial integrity.”

White House press secretary Jen Psaki, at a Feb. 11 briefing, said Biden also expressed concerns to Xi about the regime’s lack of transparency during the pandemic.

The call was the first between Chinese and U.S. leaders since Xi spoke with then-President Donald Trump on March 27, 2020, nearly 11 months ago. Last year, the former Trump administration drastically increased tough measures against the CCP targeting a range of areas, from its human rights abuses to technology theft to military aggression.

Biden officials have signaled a similarly tough stance toward the regime but emphasized the need to work with allies to confront the challenge, in what they say is a point of departure from the Trump administration. Trump officials have defended its approach, saying it did work with allies in Asia and that engaging in a broken United Nations system wasn’t effective.

U.S. officials have also said that the new administration could cooperate with the regime on shared concerns such as climate change.

Xi emphasized cooperation in the call, according to the readout issued by Beijing, telling Biden that “cooperation is the only correct choice for both sides.” He said the two countries could work together on combating the pandemic, fostering a global economic recovery, and maintaining regional stability.

The Chinese leader emphasized that “while the two sides may differ on some issues, it is crucial to show mutual respect, treat each other as equals, and properly manage and handle the differences in a constructive fashion,” the statement said.

However, Gordon Chang, author of “The Coming Collapse of China,” said that when it comes to the Chinese communist regime, cooperation goes only one way.

“The Communist Party has been very clear. They say that if you don’t cooperate with us on everything, we’re not going to cooperate on anything,” Chang said in a previous interview with The Epoch Times.

He added that the CCP will not allow discussion on a range of topics it deems part of its core interests, including Hong Kong, Taiwan, and Xinjiang—which the regime’s top diplomat has described as a “red line.”

On Feb. 10, a senior administration official told reporters ahead of the telephone call that Biden would be “practical, hard-headed, clear-eyed” in dealings with the Chinese leader.

At the same time, the official said, Biden wanted to ensure that the two countries have an open line of communication, despite U.S. concerns about Chinese behavior.

U.S. officials said the call came at a time when Washington believed it was in a position of strength, after consultations with allies and partners, to lay out its concerns about China’s “aggressive activities and abuses.”

They said the administration would look in coming months to add “new targeted restrictions” on certain sensitive technology exports to China and also that there would be no quick moves to lift the tariffs the Trump administration left in place against Chinese imports.

Psaki, on Feb. 11, said the administration was “not in a rush” in relation to its reviews of Trump-era China policies.

Biden on Feb. 10 announced the U.S. Department of Defense will conduct a review on how the military will handle the threat posed by China.