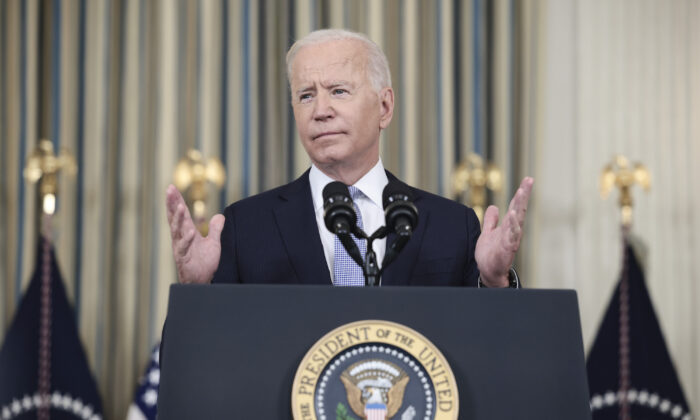 President Joe Biden gestures as he speaks to reporters at the White House on Sept. 24, 2021. (Anna Moneymaker/Getty Images)
By Tom Ozimek

President Joe Biden has said that talks on his $3.5 trillion spending proposal were at a standstill as congressional Democrats struggle to bridge differences between the party’s factions.

Biden made the remarks at a Sept. 24 White House briefing, during which he addressed a range of issues, including the still-evolving multitrillion package of social safety net and climate programs.

“We’re getting down to the hard spot here,” Biden said. “We’re at this stalemate at the moment.”

Biden said the process is “going to be up and down,” adding, “I’m confident that, at the end of the day, we’re going to be able to get that done.”

His remarks shed light on competing priorities and differences in viewpoint between the Democratic Party’s progressive and moderate wings.

Progressive Democrats, meanwhile, have threatened to derail a separate $1.2 trillion measure that would finance highway, internet, and other infrastructure projects unless moderates back the bigger $3.5 trillion package as well.

Manchin argued in a Wall Street Journal op-ed earlier in September that the $3.5 trillion measure would create “inflation and debt.”

“Some in Congress have a strange belief there is an infinite supply of money to deal with any current or future crisis, and that spending trillions upon trillions will have no negative consequence for the future,” Manchin wrote. “I disagree.”

The West Virginia senator, who has emerged as a voice of moderation amid talks on the spending proposal, urged his colleagues to “hit a strategic pause” on the legislation, which Democrats are seeking to approve under the budget reconciliation process.

“A pause is warranted because it will provide more clarity on the trajectory of the pandemic, and it will allow us to determine whether inflation is transitory or not,” Manchin wrote.

Inflation has emerged as a key concern amid the economic recovery, rising faster than wages and eroding the buying power of Americans.

Federal Reserve officials have maintained that inflation is temporary and that the pace of price hikes will taper off, although they’ve acknowledged the risk that upward price pressures may be more persistent.

The Fed’s policy-setting body met on Sept. 21–22, and officials voted to keep interest rates at near zero. However, they brought forward their expectations for rate hikes, suggesting a mix of optimism about the pace of economic recovery and fear that easy money policies would fan the flames of inflation.

Manchin recently indicated that he and Biden were working to overcome lingering disagreements over the scope of the $3.5 trillion legislation.