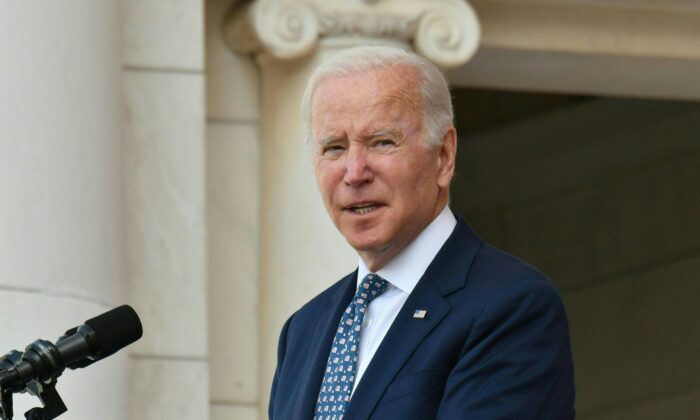 President Joe Biden saluted U.S. troops on Veterans Day and announced a multi-pronged effort to better treat military veterans suffering from ailments believed to be linked to exposure to contaminants while serving overseas.

Biden, speaking on Nov. 11 at the Arlington National Cemetery, said the day was about paying homage to “the bravery and dedication that distinguishes all of those who have earned the title of veteran.”

“We have to remember there is nothing a low risk or low cost about war to the men and women who fight it,” he added.

“We’re going to work with Congress—Republicans and Democrats together—to make sure our veterans receive the world-class benefits that they’ve earned, and meet the sacred—the specific care—specific needs that they each individually need. That means expanding presumptive conditions for toxic exposure and particulate matter, including Agent Orange and burn pits.”

The White House said it was making it easier for veterans who believe they suffer from ills stemming from exposure to hazardous materials to get benefits.

One prong of the effort is to allow the Department of Veterans Affairs to create “presumptions of exposure” when there’s evidence of health problems linked to environmental exposure “in the aggregate” but “hard to prove on an individual basis.”

The administration started processing disability claims for asthma, rhinitis, and sinusitis based on presumed exposure to particulate matter for troops who served in Southwest Asia and other areas, who developed the conditions within 10 years of their military service.

Experts from the National Academies of Science, Engineering, and Medicine and other Veterans Affairs experts examined the evidence and developed the model that will help identify other presumed exposures.

“We are seeking more information from veterans, more evidence from more sources, and looking to take every avenue possible to determine where a potential presumptive illness based on military service location may exist in a more expedient and holistic manner,” Veterans Affairs Secretary Denis McDonough said in a statement.

“We want all veterans who may have been impacted to file a claim even if it was previously denied.”

Biden’s eldest son, Beau, died at age 46 in 2015 from brain cancer. The president has suggested that his son’s cancer was linked to toxins from waste-burning at military facilities during his deployment in Iraq.

Biden told PBS in 2018 that there was no “direct scientific evidence” his son’s cancer was caused by the smoke but added that “a lot higher incidence of cancer [is] coming from Iraq now and Afghanistan than in other wars.”

“It took decades to provide access to compensatory benefits and health care to many Vietnam era veterans for conditions presumed to be related to Agent Orange exposure. For the newest generation of veterans, concerns about burn pits and other exposures continue to mount,” the White House said in a statement.

Biden returned to the White House after his remarks, entering the complex at about 12:45 p.m., and had no further events on his schedule until Nov. 12.