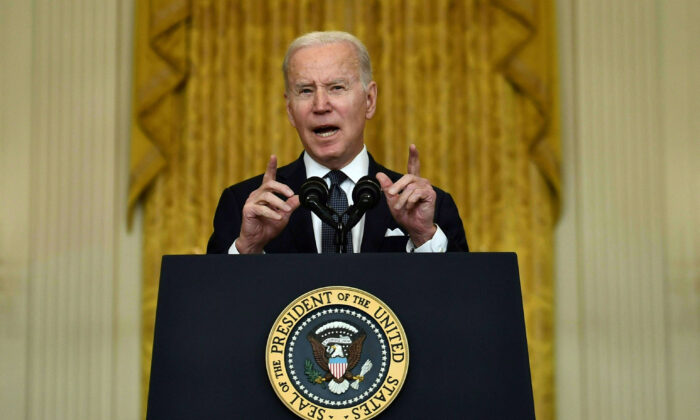 President Joe Biden speaks about Russia and Ukraine in the East Room of the White House on Feb. 15, 2022. (Brendan Smialowski/AFP via Getty Images)
Executive Branch

President Joe Biden continues to caution against a potential Russian invasion of Ukraine despite reports of Russia withdrawing some of its troops from the Ukrainian border.

Not long after Russian President Vladimir Putin said Tuesday that he is open to security talks with the West and that some Russian forces are leaving their position near Ukraine, Biden gave a speech saying that a Russian invasion is “still very much a possibility.”

Biden added that while a Russian troop withdrawal “would be good,” the United States has “not yet verified” that any troops are pulling back.

“Indeed, our analysts indicate that they remain very much in a threatening position,” Biden said before totaling the total Russian troop count along the Ukrainian border and in Belarus at more than 150,000—an increase from previous claims.

This is after the Russian Defense Ministry described images it released Tuesday of tanks and armored vehicles on the move as troops relocating to “places of permanent deployment.”

Russia has denied it’s planning an invasion but has demanded that the West put a halt to Ukraine’s bid to join NATO.

Biden reiterated Tuesday the U.S. stance that diplomacy with Moscow is the best way forward, saying that NATO is not a threat to Russia.

“We’re willing to make practical result-oriented steps that can advance our common security,” Biden said. “We will not sacrifice basic principles though.”

Western leaders have maintained that nations should have a right to territorial integrity and the freedom to choose with whom they associate.

Biden also repeated that the United States and its allies will impose severe sanctions if Russia moves to invade Ukraine, saying that the “long-term consequences [sic] will undermine Russia’s ability to compete economically and strategically.”

Biden again urged U.S. citizens to leave Ukraine now. The United States announced Monday that diplomatic personnel were being relocated from the embassy in Kyiv to the western city of Lviv.

Biden also said again Tuesday that while the United States will not send troops to fight in Ukraine, it will defend NATO territory.

The Pentagon announced on Monday that Defense Secretary Lloyd Austin is traveling to visit eastern NATO allies in Europe this week to meet with foreign leaders and oversee troops stationed in the region.

The Biden administration announced plans on Feb. 2 to up its troop presence in Eastern Europe. That deployment includes about 2,000 troops going to Germany and Poland, and a 1,000-member mounted cavalry unit moving to Romania from Germany.