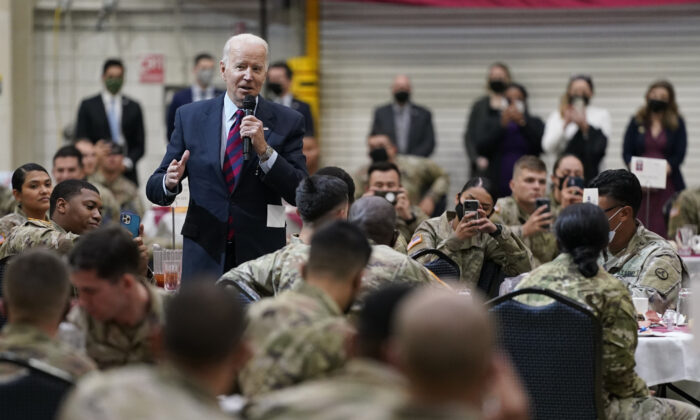 President Joe Biden, America’s oldest president, is planning on running for a second term in 2024.

“He is. That’s his intention,” White House press secretary Jen Psaki told reporters on Air Force One on Nov. 22.

Recent reports stated that Biden has been informing allies that he’ll run for a second term.

Biden, who turned 79 over the weekend, became the oldest person sworn in as president in January. Before that, President Ronald Reagan had been the oldest president. Reagan was 77 when he left office.

Some Democrats have wondered whether Biden would seek another term due to his age and a drop in his approval ratings.

“I’m hoping the president runs for reelection, but, for whatever reason, that might not be the case, it’s hard to believe there would be a shortlist without Kamala’s name on it. She’s the vice president of the United States,” former Sen. Chris Dodd (D-Conn.), a Biden ally, recently told The New York Times.

Vice President Kamala Harris, 57, was a 2020 presidential candidate, but dropped out of the race after Biden and Sen. Bernie Sanders (I-Vt.) won a series of early-voting states in the Democratic primaries. Biden later tapped her as his running mate.

“That’s my expectation,” Biden told reporters in March when asked about the prospect of running again.

Biden beat former President Donald Trump in 2020 by 74 electoral votes. Trump, 75, has floated the possibility of making a 2024 presidential bid, but has said he won’t announce his plans until after the 2022 midterm elections.

Biden was examined by a doctor on Nov. 19 for the first time since taking office. The post-exam report stated that Biden has several new conditions, including a stiffened gait and frequent coughing.

“Why didn’t Biden take a cognitive exam during his physical? The majority of Americans KNOW something isn’t right with Biden, and this White House is HIDING it,” Jackson wrote on Twitter.

“He should have the same cognitive exam President Trump had and release the results. I will gladly administer it!”