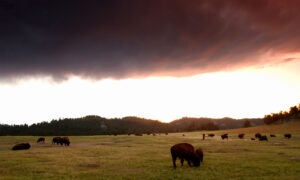 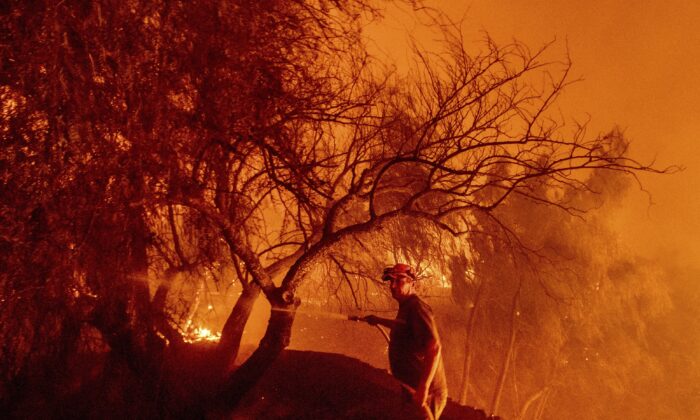 Bruce McDougal hoses down vegetation while working to save his home from the Bond Fire burning though the Silverado community in Orange County, Calif., on Dec. 3, 2020. (Noah Berger/AP Photo)
Executive Branch

President Joe Biden shared his administration’s plan to deal with the intensifying wildfires in the Western U.S. at a White House Meeting on Wednesday with western state governors, calling the fires a problem that affects everyone.

Biden told the governors he had been briefed twice about the current wildfire readiness of federal and state agencies and said there is a lot to be done.

“We know this is becoming a regular cycle and we know it’s getting worse,” Biden added. “The truth is, we’re playing catch-up. This is an area that’s been under-resourced, but that’s going to change if we have anything to do with it.”

“Wildfires are not a partisan phenomenon. They don’t stop at a county or state line or country mind for that matter. We need a coordinated, comprehensive response,” said Biden.

Predictive Services National Interagency Fire Center issued its National Significant Wildland Fire Potential Outlook summary (pdf), a report on where wildfires could most likely be expected from June to September of 2021.

According to the summary, drought intensified over the Western U.S., especially in California with now more than 87 percent of the area categorized in drought.

The summary predicts wildfire potential will be higher than normal in the Southwest until monsoons arrive in July. For the rest of the period, fire potential will be increasing in the Great Basin and the Pacific Coast states. From July through September, nearly all of the mountainous areas of California, Oregon, and Washington are in the above normal category.

The first part of Biden’s plan is to ensure there are enough trained and equipped firefighters.

“This year we’re going to provide a retention incentive that’s going to ensure federal wildland fires, our firefighters are making at least $15 an hour and provide for additional 10 percent bonuses for those working on the front lines, but a one-time boost is not enough.”

Besides temporary bonuses, Biden wants to bolster permanent benefits for firefighters, “including improvements in their compensation, their benefits, and their work-life balance.” He added that the federal government will provide funding for training national guard troops so they can be a part of the firefighter team that assists with wildfire season.

The administration is going to work with the National Oceanic and Atmospheric Administration capabilities with satellites, the Department of Energy’s computer analysis technology, and equipping the affected communities with the information to better protect themselves from smoke and fire risks.

“Second thing, we are harnessing new tools and technologies to better identify and respond before new fires grow in the large uncontrolled conflagration,” said Biden.

In addition, Biden said the bipartisan infrastructure legislation, if passed will provide an investment of about $50 billion to wildfire management as well as FEMA funds.

“And today, I’m announcing a $37 million federal grant to Sonoma County, California, in support of fire mitigation efforts that are underway. This grant is part of FEMA’s BRIC program (building resilient infrastructure and communities),” Biden added.

Governors of Oregon, California, and Colorado praised the administration’s efforts to get in front of the 2021 wildfires.

“We welcome our partnership with President Biden whose team is committed to being strong partners with the states to effectively fight wildfires and do the work necessary to avoid and lessen the likelihood of future catastrophes,” said Oregon’s Governor Jared Polis on Wednesday.