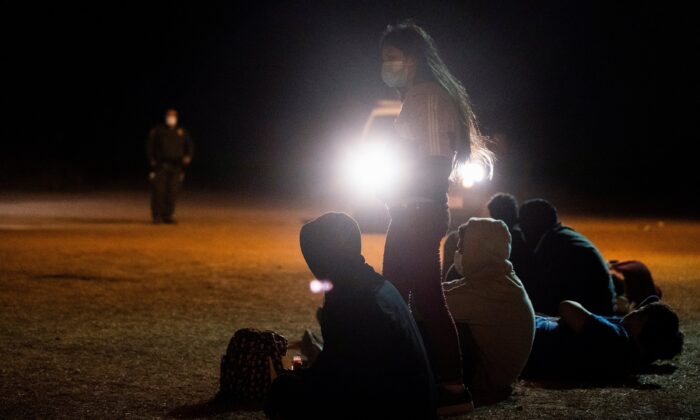 Unaccompanied illegal immigrant children wait to be transported by the U.S. Border Patrol after crossing the Rio Grande River into the United States from Mexico in La Joya, Texas, on April 7, 2021. (Go Nakamura/Reuters)
Executive Branch

President Joe Biden’s administration is accepting new applications from parents who want to bring children as old as 20 from Central America, years after former President Donald Trump ended the program.

The Central American Minors Program was launched in 2014 during the Obama administration to let certain parents legally present in the United States bring their children from Guatemala, Honduras, or El Salvador to the United States if their request was cleared by U.S. authorities. It was first announced by Biden, then the vice president, in November 2014.

Trump terminated the program in 2017.

Now it’s being restarted as part of the Biden administration’s attempts to expand legal pathways to enter the United States. New applications were accepted for the first time in four years on Sept. 14.

The administration not only rebooted the program, but expanded it. In addition to parents, legal guardians can ask for their kids to be flown from their home country to the United States. The parents or legal guardians can even have pending asylum cases, or be in America on parole, and apply.

“We are firmly committed to welcoming people to the United States with humanity and respect, and reuniting families. We are delivering on our promise to promote safe, orderly, and humane migration from Central America through this expansion of legal pathways to seek humanitarian protection in the United States,” the Departments of State and Homeland Security said in a statement.

Marta Youth, a deputy assistant secretary at the U.S. State Department, told reporters in a remote news conference that some 1,400 cases would be reopened as part of the program’s resumption, Reuters reported.

America’s Voice, a pro-immigrant group that wants to make it easier for illegal immigrants to become citizens, was among those praising the resumption of the program.

“CAM offers a safe, expeditious and orderly way for young people to seek safety and apply for reunification with loved ones from the region. After vetting and approval, these young people will board airplanes and join family in America. This provides an alternative route to protection,” Frank Sharry, executive director of the group, said in a statement.

The Federation for American Immigration Reform, though, argued that the program elevates illegal aliens above U.S. citizens and legal immigrants.

“Virtually all Central American minors who were left behind by parents who entered the U.S. illegally will be able to be admitted or paroled to the country and the American taxpayers will bear the costs of administering the program, while lawful immigration programs continue to experience historic delays and backlogs,” Matthew Tragesser, spokesperson for the group, which seeks to reduce immigration levels, told The Epoch Times in an email.

“The reimplementation of this program reveals where the Biden administration’s immigration focus stands right now. It does not want to secure our southern border or limit incentives for illegal aliens, despite illegal immigration increasing every month under the administration and apprehension totals reaching figures not seen in two decades,” he added.

Illegal border apprehensions have shot up since Biden took office in January, hitting a 21-year-high in July. One expert projected arrests at the border setting a new record this year. The jump has included an unprecedented number of unaccompanied minors, or illegal immigrant children who arrive without a responsible adult. Over 13,000 unaccompanied minors were in U.S. government custody as of Sept. 13.

Biden administration officials have asserted that the chaos seen at the border is a result of changing what was a “cruel” immigration system under Trump. They’ve said it takes time to alter the system and that some areas have seen improvement.

Changes so far include stopping construction of the border wall, halting the “Remain in Mexico” program, and proposing to let immigration officers take over hearing some asylum cases from judges.

The dramatic alterations have hit some roadblocks, with judges ruling against the administration in a series of key cases, including ordering officials to resume Remain in Mexico.

A Department of Homeland Security official told The Epoch Times in a recent email this week that the department has not yet started to return illegal immigrants to Mexico, the core part of the program.

The agency was scheduled to deliver a report on the resumption on Sept. 14.