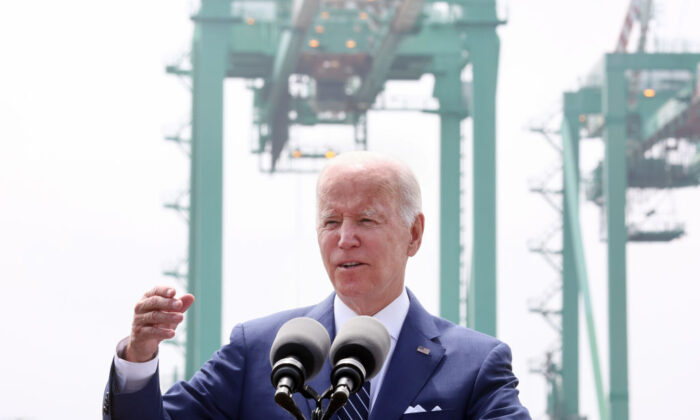 LOS ANGELES—President Joe Biden said his top economic priority was “fighting inflation” June 10 and blamed Russia’s President Vladimir Putin’s invasion of Ukraine for causing the higher prices as he stood before semi-trucks clearing cargo at the Port of Los Angeles.

The president stopped at the nation’s busiest port to also talk about his work to fix supply chain snarls that have contributed to rising prices.

Lowering the cost of moving goods through the supply chain was one way to fight inflation, Biden said.

The president did not explain how he might lower shipping costs but added the federal government is funding “major new initiatives on the docks,” including a port rail system improvement and the addition of electric vehicles.

Biden spoke on the phone the day before with companies affected by inflated shipping prices.

Hal Lawton, CEO of Tractor Supply company told the president his company was paying $3,500 per container in 2020. By September of last year, they were paying upwards of $25,000.

Shipping cost inflation is one of the big reasons why prices are going up. Only nine ocean shipping companies are available to transport goods from Asia to the United States, Biden said.

Wade Miquelon, CEO of Jo-Ann Stores, a fabric retailer company, said his prices have risen by about $100 million in increased shipping costs.

“We’re not a huge company but that $100 million increase that they passed onto us is more than our entire profit,” Miquelon told Biden during the call.

“They are depending on us to be able to deliver those products from my farms to their countries,” Duvall said. “And if we don’t fix this problem, we will lose our customers.”

Biden is “cracking down” on shippers, according to the White House.

“We’ve got to change this,” Biden said. “I asked the Congress to pass a piece of legislation to remedy this. Democrats and Republicans voted for it. It’s over in the House of Representatives. I expect it to be voted on fairly shortly, and I expect it to pass. I’m looking forward to signing it because we’ve got to bring down prices.”

The underlying elements of the U.S. economy are strong but inflation is a problem, the president said.

Online reactions to the president’s comments were varied.

“Biden just said ‘I’m not making this up!’—right before making up that core inflation has gone down, Americans’ savings are up, and he already solved the supply chain crisis. He has no idea what he’s talking about,” Rep. Darrell Issa (R-San Diego) wrote on Twitter.

Laurie Garrett, a Pulitzer Prize-winning writer, said Biden was “laying it on thick.”

“Biden lays it on thick: Accuses the oil industry of manipulating responses to the #COVID19 #pandemic crisis, supply chain issues & the war in #Ukraine to jack up gas prices all over the world. So, he says, ‘@Exxon made more money than God this year,’” Garrett wrote on Twitter.

The LA port is preparing for an early arrival of peak-season goods, and orders from Asia looked strong, according to Seroka.

“The June numbers will be very healthy,” Seroka said.

Next door, the Port of Long Beach saw its second-busiest month in May and its strongest month so far in 2022, according to a statement released June 9. The port processed 891,000 containers in May, a 1.8 percent decline from May 2021, which remains the Port’s busiest month in its 111-year history.

“We are moving an extraordinary amount of cargo and continue to work with industry partners to quickly move imports and empties off the docks,” said Port of Long Beach Executive Director Mario Cordero. “Looking ahead, we are ready for the traditional summertime surge to coincide with China’s recovery from a lengthy lockdown.”

Top California officials joined the president on board the USS Iowa for the speech, including Los Angeles Mayor Eric Garcetti and Sen. Alex Padilla (D-Calif.). The president is in Los Angeles this week to participate in the Ninth Summit of the Americas.