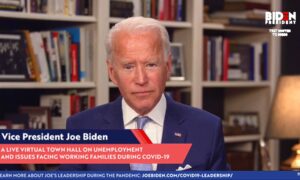 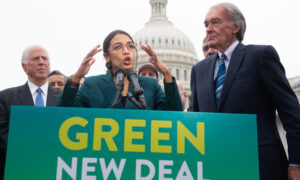 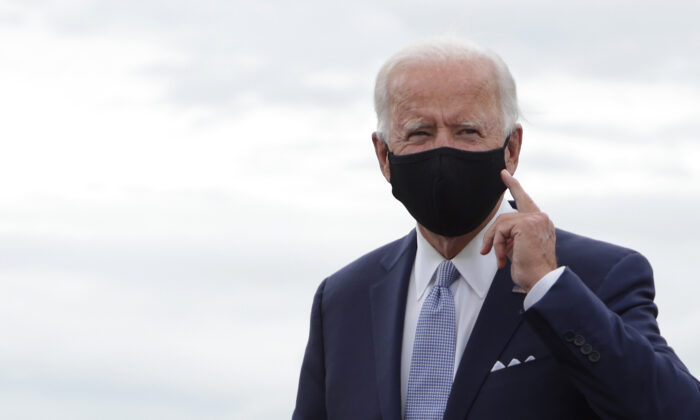 Democratic presidential nominee Joe Biden, in an interview on Sunday, reversed his earlier stance on imposing a federal mask-wearing mandate, saying that if he were to win the race for the White House, he wouldn’t force Americans to don facial coverings because he thinks such an order would likely violate the constitution.

Biden told AZFamily’s “Politics Unplugged” that using executive authority to mandate nationwide mask-wearing would likely be unconstitutional and that, instead, he would try to persuade Americans to wear masks by laying out a national standard and setting an example by covering his face when out in public.

“But I plead with … I carry my mask with me everywhere I go. I set an example,” he added.

Biden’s remarks on Sunday represent a departure from his earlier position, when he said he favored a federal mask mandate.

“We’ll have a national mandate to wear a mask—not as a burden, but to protect each other,” Biden said on the last night of the Democratic National Convention, during his nomination acceptance speech. “It’s a patriotic duty.”

It follows earlier statements, when Biden said governors need to implement mask mandates for the next three months, claiming the move would save the lives of 40,000 Americans.

“Every single American should be wearing a mask when they’re outside for the next three months as a minimum,” he told reporters at a press conference. He said the mandate would “get our kids back to school sooner than later” and would “get our businesses back long-term.”

“Protect your fellow citizens. Step up. Do the right thing,” he said. To date, over 189,000 people have died of the CCP (Chinese Communist Party) virus in the United States, while 6.2 million have tested positive for the potentially deadly bug.

Democratic vice presidential nominee, Kamala Harris, in an interview with CNN on Sunday, reinforced Biden’s pivot by saying that pitching mask-wearing to Americans would not take the form of a binding order, but federal guidance.

“The Biden-Harris position on this is that leaders must lead. And one of the ways leaders lead is they set standards,” Harris said.

“What Joe has been very clear about in his personal behavior, much less in what he is admonishing and respecting of the American people, is that we all make the sacrifice to wear a mask in the interest of love of our neighbor, in the interest of defeating or at least reducing the health risks or the number of deaths in America. So it’s about a national standard,” Harris added.

Biden has also said he would pressure local authorities to mandate facial coverings.

White House Chief of Staff Mark Meadows said in a Fox News interview that mask orders are “a state-to-state issue.”

“When we look at masks and the wearing of masks, that’s done on a location basis, when you can’t have social distancing, but certainly a national mandate is not in order,” said Meadows. “We’re allowing governors and mayors to weigh in on that.”