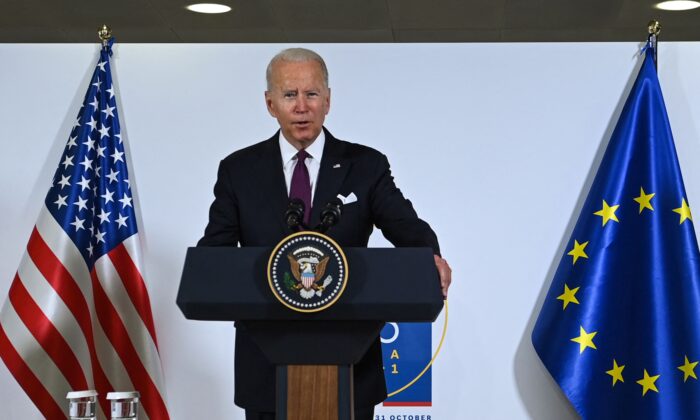 President Joe Biden addresses the media during the G-20 of World Leaders Summit at the convention center "La Nuvola" in the EUR district of Rome, Italy, on Oct. 31, 2021. (Brendan Smialowski/AFP via Getty Images)
Executive Branch

Biden: Pushing OPEC to Boost Oil Output ‘Not at All Inconsistent’ With Climate Goals

President Joe Biden said on Sunday that it was “not at all inconsistent” for him to push energy-producing countries to ramp up production of fossil fuels while also urging others to lower emissions in line with his climate goals.

Speaking at a press briefing following days of negotiations in Rome between leaders of the Group of 20 major economies, Biden made the remarks in response to a question from a reporter who asked whether he saw “any irony” in pushing nations to increase oil production, while at the same time attending COP26 climate talks in Glasgow, Scotland, “to urge people to lower emissions.”

“Well, on the surface, it seems like an irony, but the truth of the matter is—you’ve all known; everyone knows—that the idea we’re going to be able to move to renewable energy overnight and not have—from this moment on, not use oil or not use gas or not use hydrogen is just not rational,” the president said, defending his position.

“It’s not at all inconsistent in that no one has anticipated that this year we would be in a position, or even next year, that we’re not going to use any more oil or gas,” he said.

For example, Biden said, the United States still needs gasoline even as it aims to have electric vehicles make up half of the vehicles on U.S. roads by 2030.

“But we will get to the point that, by 2050, we have zero emissions,” the president added referring to his pledge to achieve net-zero emissions, economy-wide.

At the G20 talks, the president urged energy-producing countries with spare capacity to boost production to ensure a stronger global economic recovery as part of a broad effort to pressure OPEC and its partners to increase oil supply.

Biden suggested that oil-producing nations including Saudi Arabia and Russia have inadequately responded to managing output amid a supply-chain crisis, saying that “idea” that the countries and other major producers “are not going to pump more oil so people can have gasoline to get to and from work … is not, right,” Bloomberg reported.

Biden is scheduled to attend COP26, which began on Oct. 31 and finishes on Nov. 12. He will be joined by White House climate advisers John Kerry and Gina McCarthy, the Biden administration has said.