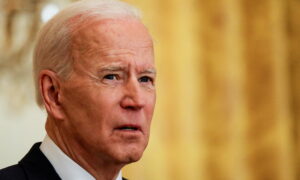 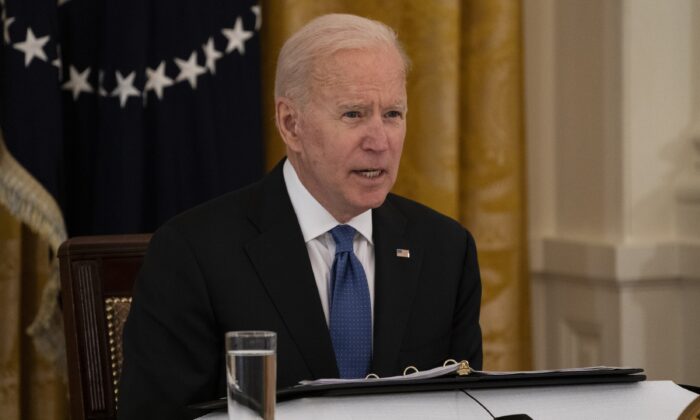 President Joe Biden speaks during a Cabinet meeting in the East Room of the White House in Washington on April 1, 2021. (Evan Vucci/AP Photo)
Executive Branch

President Joe Biden would be prepared to push through his $2 trillion infrastructure package without the backing of Republican lawmakers, Energy Secretary Jennifer Granholm said on Sunday.

Granholm suggested that the president may consider attempting to pass the legislation by using a budget process to cut out Republicans and to bypass the filibuster, lowering the threshold required in the upper chamber to a simple majority from 60 votes.

It was used by Senate Democrats to pass the latest COVID-19 relief package with zero Republican votes.

“As he has said, he was sent to the presidency to do a job for America. And if the vast majority of Americans, Democrats and Republicans, across the country support spending on our country and not allowing us to lose the race globally, then he’s going to do that,” Granholm said on CNN’s “State of the Union.”

Granholm added that Biden would prefer his infrastructure package to have bipartisan support, however.

Senate Minority Leader Mitch McConnell (R-Ky.) signaled last week that he’s unlikely to support Biden’s infrastructure package, saying he would not back spending or “massive” tax hikes that could balloon the national debt.

McConnell said that Biden’s infrastructure plan will likely be a “Trojan horse” that includes other Democratic priorities such as tax hikes to fund the plan.

“The administration’s non-infrastructure ‘infrastructure bill’ looks like another Trojan horse for far-left demands. Rolling back Right to Work laws. Imposing the biggest new tax hikes in a generation—killing jobs and slowing wage growth when workers need a fast recovery,” he said on Twitter.

Amid growing criticism of Biden’s plan by fellow caucus members, McConnell decried the package and the proposals to fund it by increasing the corporate tax rate to 28 percent from the current 21 percent, calling the bill a “major missed opportunity” for funding serious infrastructure developments.

“Our nation could use a serious, targeted infrastructure plan. There would be bipartisan support for a smart proposal. Unfortunately, the latest liberal wish-list the White House has decided to label ‘infrastructure’ is a major missed opportunity by this administration,” McConnell said.

Sen. Roy Blunt (R-Mo.) on Sunday called on the Biden administration to significantly scale back the infrastructure package if Biden wants GOP backing, noting that a smaller sum of around $615 billion would be more likely to attract backing from Republican colleagues.

“If we’d go back and look at roads and bridges and ports and airports, and maybe even underground water systems and broadband, you’d still be talking about less than 30 percent of this entire package,” Blunt told “Fox News Sunday.”