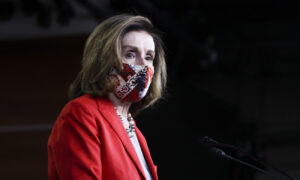 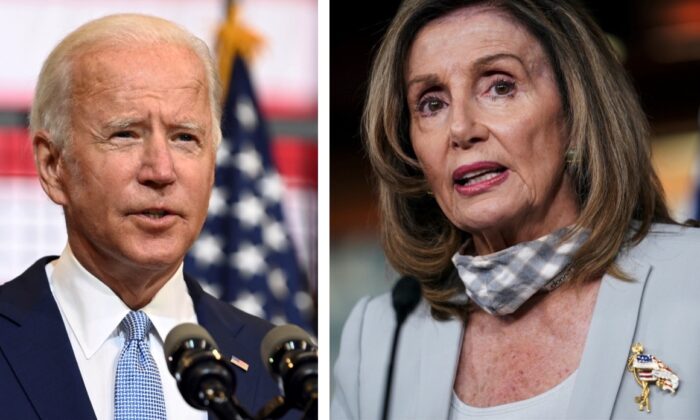 Democratic presidential nominee Joe Biden has congratulated House Speaker Nancy Pelosi (D-Calif.) on her reelection as speaker, hailing her track record as a lawmaker and touting her as one of the most effective legislators in American history.

In a statement on Sunday, Biden welcomed news of Pelosi’s reelection, which took place in a narrow 216-209 vote, with two of her Democrat colleagues voting for different candidates and three others voting “present.” Pelosi has led the House Democrats since 2003 and was widely expected to retain her post despite a quiet effort to oust her.

“Jill and I extend our warmest congratulations to Speaker Pelosi on her well-deserved reelection today as Speaker of the House of Representatives,” Biden said in the statement, calling Pelosi “a trailblazing leader—and one of the most effective and accomplished legislators in our nation’s history.”

Pelosi was first elected to Congress in 1987 and has a long track record as a legislator, with her oldest key national vote, as logged by tracking site Votesmart.org, showing that in 1991 she sponsored the Conditional Extension of Most-Favored-Nation Trade Status to China act. The bill, called H.R.2212 (pdf), sought to impose stricter conditions on renewing China’s preferential treatment as a so-called “most favored nation,” which was a status that granted China favorable access to the American market. It called for tougher treatment of China unless it improved its behavior in the area of human rights, forced labor, intellectual property theft, unfair trade practices against the United States, and weapons proliferation. The bill was ultimately vetoed by George H.W. Bush, who in his veto letter (pdf) argued for a policy of engagement with China rather than a get tough approach.

According to a Govtrack.us legislator report card, Pelosi was the primary sponsor of seven bills that were ultimately enacted, which ranged from major initiatives like the Economic Stimulus Act of 2008 and the Housing and Economic Recovery Act of 2008, to lesser bills like the San Francisco Old Mint Commemorative Coin Act and the Winter Run Chinook Salmon Captive Broodstock Act of 1993.

Pelosi has long drawn the ire of conservatives for her support for left-leaning policies, particularly around sensitive issues like LGBT and abortion rights.

Biden, in his statement, said that he looks forward to working with Pelosi during the new Congressional term, adding, “With Speaker Pelosi’s leadership, we will come together to defeat the ongoing pandemic, take on the existential threat of climate change, instill greater equity and justice in our society, and build our economy back better than before.”

Pelosi, in remarks from the House floor on Sunday outlined some of the Democrats’ policy priorities during the 117th Congress, with a heavy focus on social justice.

“We must pursue justice: economic justice, justice in health, racial justice, environmental, and climate justice. The list goes on,” she added.

The prominence of social justice initiatives in Pelosi’s remarks will likely reinforce conservative worries about the Democrat Party’s leftward drift, and fuel concern about the growth in profile of the party’s far-left faction.