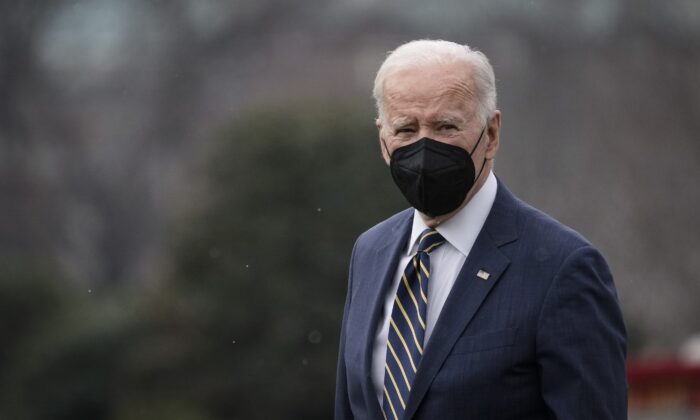 President Joe Biden leaves the Oval Office and walks to Marine One on the South Lawn of the White House on Jan. 28, 2022. (Drew Angerer/Getty Images)
Executive Branch

Biden Plans to Reduce Cancer Deaths by Half in 25 years

President Joe Biden on Tuesday announced his commitment to reduce the nation’s cancer death rate by half in the next 25 years as part of an effort to “reignite” former President Barack Obama’s “Cancer Moonshot” initiative.

In the years following the passage of the National Cancer Act in 1971, the nation’s cancer death rate remained largely flat. But in the past 20 years, it has decreased by about 25 percent—in large part due to the development of new treatments, therapies, and early detection.

Cancer Moonshot was started in 2016 with the goal of accelerating the advancement of cancer research over the next five years by streamlining FDA approval of cancer treatments.

Biden announced his new ambitious goal in front of an audience in the East Room of the White House on Feb. 2, saying the fight against cancer is a White House presidential priority.

“I promise you, we can do this. All those we lost, all those we miss; we can end cancer as we know it,” said Biden, who lost his elder son, Beau, to brain cancer in 2015.

It also calls to “jumpstart progress” on making up for cancer screenings that were missed as a result of government-imposed lockdowns during the onset of the CCP (Chinese Communist Party) virus outbreak.

Ahead of the announcement, a senior administration official pointed to government efforts to accelerate the development of vaccines for COVID-19 as a possible starting point for future breakthroughs in cancer treatments.

“We can also take lessons from the mRNA vaccines that were developed against the virus that causes COVID-19 by asking, ‘Can we make mRNA vaccines that teach your immune system to recognize the distinctive mutations that occur in cancer cells?’” the official said.

“There’s a lot of thinking right now that things like that could cause your body to be able to recognize and attack those early cancer cells before there’s even any tumor to see and could decrease the overall incidence.”

Dr. Barron Lerner, a professor of medicine and population health at New York University Langone Health, said that “hyperbolic goals” can be useful to attract public attention to the cause but achieving the 50 percent reduction is “extremely unlikely.”

The American Cancer Society estimates there will be 1,918,030 new cancer cases and 609,360 cancer deaths this year.

In the time since the start of CCP virus outbreak, COVID-19 has claimed more that 800,000 lives in the United States, according the Centers for Disease Control and Prevention (CDC). Cancer has claimed 1.2 million American lives in that same time, Biden said on Tuesday.