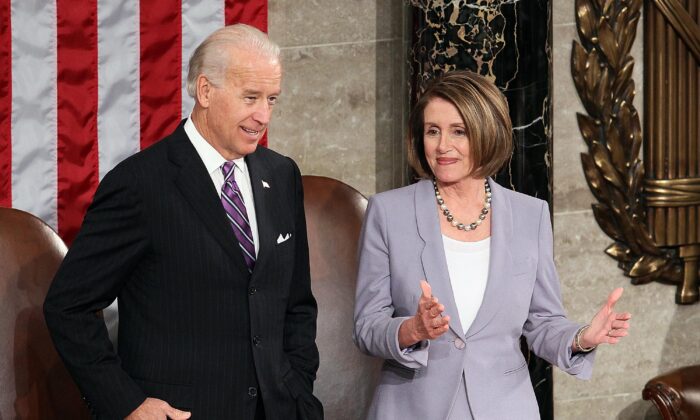 Then-Vice President Joe Biden and U.S. Speaker of the House Rep. Nancy Pelosi at the U.S. Capitol in Washington on Jan. 27, 2010. (Mark Wilson/Getty Images)
US News

Biden, Pelosi Could Be Denied Communion After US Catholic Bishops’ Vote

Catholic bishops based in the United States voted to approve the drafting of a “teaching document” that may rebuke President Joe Biden, House Speaker Nancy Pelosi (D-Calif.), and others for their support of abortion.

More than 73 percent of bishops—or 168 to 55 with six abstentions—this week cast their ballots during a U.S. Conference of Catholic Bishops (USCCB) conference to report on the meaning of the Eucharist in the church. The move could potentially set up the denial of communion to Biden, Pelosi, and other elected officials who are Catholic.

Biden, a Catholic who has long been a proponent of abortion, responded to a reporter’s question on Friday about the bishops’ vote.

“That’s a private matter, and I don’t think it’s going to happen,” the president said of potentially being denied communion. He didn’t elaborate.

Bishop Donald Hying of Madison, Wisconsin, said on Thursday that many Catholics are confused about a president who attends Mass regularly but supports “the most radical pro-abortion agenda in history.”

In 2019, a South Carolina Catholic priest denied Biden—described in the media as a regular Catholic Mass attendee—communion over his stance on abortion. A number of priests and bishops have said in recent months have said that politicians who are pro-abortion shouldn’t receive the Eucharist, and critics of Biden have long said that he should attempt to align his politics with his Catholicism.

San Francisco Archbishop Salvatore Cordileone, who is the archbishop of Pelosi and opposes abortion, argued that “eyes of the whole country are on us” and “if we don’t act courageously, clearly and convincingly on this core Catholic value, how can we expect to be taken seriously on another matter,” reported the Washington Post.

Opponents of the measure, including San Diego Archbishop Robert McElroy, have said the proposal could turn communion into a partisan thing.

“The Eucharist itself will be a tool in vicious partisan turmoil. It will be impossible to prevent its weaponization, even if everyone wants to do so,” McElroy said, according to media reports. “Once we legitimize public-policy-based exclusion … we’ll invite all political animosity into the heart of the Eucharistic celebration.”

Catholics for Choice, a liberal Catholic group, panned Thursday’s vote, claiming the “bishops chose to be partisan instead of pastoral” and wish to foment “tension and division.”

The Vatican, meanwhile, has attempted to slow the U.S. bishops’ drafting of the document. Last month, the Vatican’s doctrinal office tried to intervene and urged “extensive and serene dialogue” on the matter.

Ultimately, the document that was voted on this week will require the Vatican’s approval, which is known as a “recognitio.”