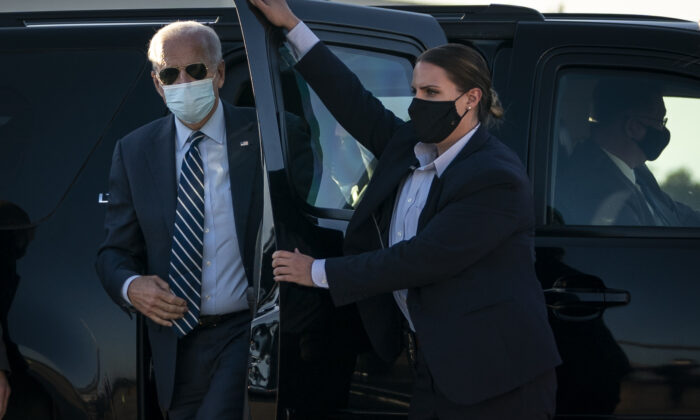 Mostly because of large contributors, former Vice President Joe Biden has been able to raise significantly more money for his campaign than President Donald Trump in the race for the highest office of the land.

Large donors gave Biden over $390 million and Trump less than $280 million, according to data compiled by the Center for Responsive Politics (CRP).

The difference is particularly striking among those giving over $2,800. Biden raised more than $170 million from such donors, while Trump received less than $120 million.

And the difference would likely be even larger if campaign money from Biden’s joint fundraising committees was included.

Biden raised some $170 million from donors classified by the CRP as “Other,” which “consists almost entirely of transfers from Biden’s joint fundraising committees, namely the Biden Victory Fund,” CRP reporter Karl Evers-Hillstrom said in an email to The Epoch Times.

The Biden Victory Fund accepts donations from individuals of up to $721,300, with the first $5,000 going to the Biden campaign and the rest to the Democratic National Committee and the state party branches (pdf). The fund is required by law to check that donors don’t exceed their campaign contribution limits, for example, by giving money separately to the Biden campaign and the fund.

Trump raised less than $1.7 million from “Other” donors, mostly because CRP already sorted transfers from his joint fundraising committees (JFC) into small and large donor categories.

“We … will eventually do it for Biden, but need to code the data first,” Evers-Hillstrom said.

“With Biden, it appears his JFC is mostly big-money.”

Among top contributors to the Biden Victory Fund in 2020 are groups, executives, and employees of Netflix, University of California, Microsoft, and Alphabet, the company that controls the Google digital empire.

Trump has raised over $270 million from donations under $200, compared to Biden’s less than $260 million. When the JFC money is counted in, however, it’s possible Biden outraised Trump in this category as well.

In total, the Biden campaign has raised some $810 million, and the Trump campaign more than $550 million.

The Democrat owes his cash advantage to major cash-ins from August and September, when the campaign raised nearly a half-billion dollars, compared to Trump’s $143 million.

Biden also has a major lead in support from outside groups, which aren’t limited in political spending as long as they don’t coordinate with the campaign. Such groups have spent over $300 million benefiting Biden and about $210 million benefiting Trump.

Industry-wise, Trump leads in fundraising among health services organizations ($38.7 million) and also brings a major haul ($38 million) from the gambling industry. He also beats Biden in oil and gas, manufacturing, and some financial sectors.

Biden leads on Wall Street ($57.7 million), and among lawyers ($30.6 million) and educators ($30.2 million). He also beats Trump in the real estate, internet, electronics, and business service sectors as well as among health care professionals and government workers.