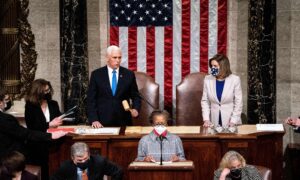 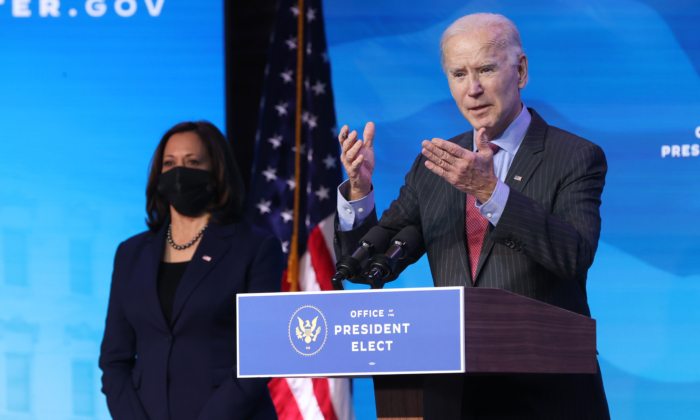 Vice President-elect Kamala Harris (L) looks on as President-elect Joe Biden (R) delivers remarks after he announced cabinet nominees that will round out his economic team, including secretaries of commerce and labor, at The Queen theater in Wilmington, Del., on Jan. 8, 2021. (Chip Somodevilla/Getty Images)
US News

President-elect Joe Biden on Friday previewed his priorities for spending to address the CCP virus pandemic, which could cost taxpayers “trillions” of dollars.

Biden said the pandemic relief bill passed in December 2020 was “just a down payment.” He outlined a plan that included $2,000 direct payment to individuals and support for some small businesses.

In outlining the plan, the president-elect said that “it’s time to raise the minimum wage” to $15, but did not explain how the move would help small businesses already struggling to pay their staff. The Congressional Budget Office estimated in July 2019 that raising the federal minimum wage to $15 would result in the loss of 1.3 million jobs nationwide. Biden’s transition team did not respond to a request for comment.

Sen. Bernie Sanders (I-Vt.), a democratic socialist, has long pushed for a $15 minimum wage. Biden said he considered naming Sanders as his labor secretary. He said the pair agreed to keep Sanders in the Senate to avoid a special election challenge.

“I can think of no more passionate and devoted ally of working people in this country,” Biden said of Sanders. “But after Tuesday’s result in Georgia, giving Democrats control of the Senate on a tied vote, Bernie and I agreed that we cannot put control of the Senate at risk on the outcome of a special election in Vermont. He agreed we couldn’t take that chance.”

“In fact, economic research confirms that with conditions like today’s crisis, especially with such low interest rates, taking immediate action, even with deficit financing, will help the economy, reduce scarring in the workforce, increase growth, and reduce our national debt burden,” Biden said.

Biden outlined his priorities before formally nominating his picks for the secretaries of commerce and labor, the deputy secretary of labor, and the administrator of the Small Business Administration.

“Congress needs to act as quickly as possible on all of the issues I just laid out. That is how we can contain the pandemic and build back better with an economy that works for all Americans. And this is the team that will help get it done,” Biden said.

Congress passed and President Donald Trump signed a $900 billion pandemic relief bill last month which included $600 direct payments to individuals. Trump pushed for $2,000 direct payments and cutting wasteful spending, like $10 million for gender programs in Pakistan. The Democrats picked up the $2,000 offer but ignored the president’s calls to trim spending. Republicans blocked the bill for $2,000 checks.

Biden said the priority for the small business stimulus will be on “Black, Latino, Asian, and Native American-owned small businesses, and women-owned businesses, finally having equal access to the resources needed to reopen and rebuild.”