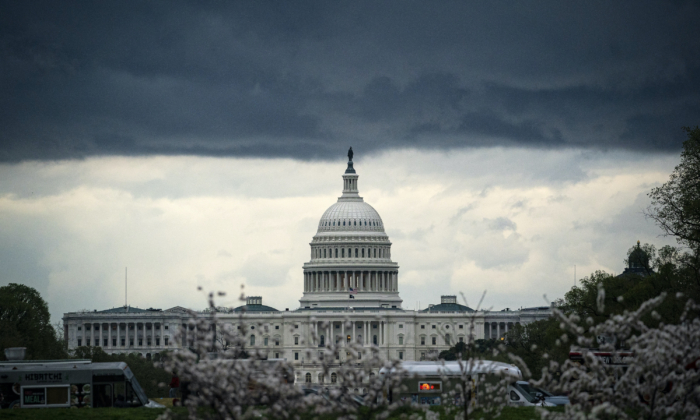 Clouds form above the U.S. Capitol in between rain showers on the National Mall in Washington, on March 28, 2021. (Al Drago/Getty Images)
Executive Branch

President Joe Biden is ordering the release of former President Donald Trump’s White House visitor logs as part of an ongoing Congressional investigation into the events at the U.S. Capitol on Jan. 6, 2021.

Trump has fought to keep these and other records of his presidency in the National Archives private, citing executive privilege.

But in a letter to the National Archives Monday, White House counsel Dana Remus said that Biden does not need to uphold his predecessor’s assertions of privilege.

“The President has determined that an assertion of executive privilege is not in the best interests of the United States, and therefore is not justified, as to these records and portions of records,” the letter reads.

Biden is instructing the National Archives to release to the select committee investigating the Capitol breach entries in visitor logs showing who was permitted to enter the White House complex during Trump’s presidency, including on Jan. 6. The agency is ordered to turn over the records within 15 days.

The Presidential Records Act mandates that records made by a sitting president and his staff be preserved in the National Archives, and an outgoing president is responsible for turning over documents to the agency when leaving office.

On Tuesday, the select committee issued its latest round of subpoenas, which includes members of the Trump campaign and state lawmakers. The committee’s Democrat chairman Rep. Bennie Thompson (D-Miss.) said in a statement the six subpoenas were a part of the committee’s efforts to seek “information about efforts to send false slates of electors to Washington and change the outcome of the 2020 election.”

The committee, comprised of seven Democrats and two Republicans, was formed last summer from a largely party-line vote and has since issued more than 80 subpoenas and conducted more than 500 interviews related to Jan. 6.

More than 725 people have been charged with crimes related to the Capitol breach.

Trump has been critical of the committee’s investigation and has repeatedly challenged the outcome of the November 2020 election.