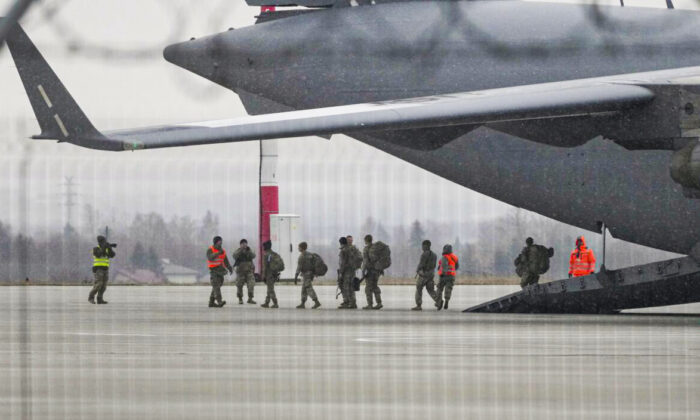 U.S. Army troops of the 82nd Airborne Division unloading vehicles from a transport plane after arriving from Fort Bragg, at the Rzeszow-Jasionka airport in southeastern Poland, on Feb. 6, 2022. (Czarek Sokolowski/AP Photo)
Executive Branch

The Biden administration on Feb. 22 ordered more troops into Eastern Europe amid concern that Russia would invade Ukraine.

In a speech, President Joe Biden said he would send U.S. troops already based in Europe to the Baltic states of Estonia, Latvia, and Lithuania, as well as Poland.

“Biden directed Secretary of Defense Lloyd J. Austin III to move forces within the U.S. European Command’s area of operations to the Baltic Republics, Poland, and Ukraine’s southeastern flank,” the Pentagon said in a statement. Those forces “will move within a week.”

Specifically, the Pentagon “ordered an infantry battalion task force of about 800 soldiers to deploy from Italy to the Baltic region” and also “approved the movement of up to eight F-35 Lightning II aircraft from Germany to operating locations on NATO’s eastern flank.”

Austin placed some 8,500 U.S. service members on a heightened state of readiness to assist NATO’s rapid-action forces if needed.

About 20 AH-64 Apache attack helicopters will deploy to the Baltic states from Germany, while 12 Apaches will be moved to Poland from Greece.

“These additional personnel are being repositioned to reassure our NATO allies, deter any potential aggression against NATO member states, and train with host-nation forces,” Pentagon officials said a statement. All forces are under the command of Air Force Gen. Tod D. Wolters, the commander of U.S. European Command.

Overall, there are about 90,000 U.S. troops stationed across Europe, according to the Pentagon. Earlier this month, the Pentagon ordered all Americans in Ukraine to depart the country amid Russian forces having allegedly massed more than 150,000 troops along its borders.

Biden’s speech, which included an announcement that he would sanction Russian sovereign debt and two banks, came a day after Russian President Vladimir Putin said he would recognize the independence of two breakaway Ukrainian regions. Putin also signed an order that authorized sending in Russian troops for what he called peacekeeping purposes.

At the same time, Biden said that if Russia decided to take further action, his administration would use tougher sanctions. The president also suggested that gas and energy prices would go up, but he claimed, without elaborating, that his administration is working to mitigate such problems.

Despite Putin’s rhetoric, there was still no clear indication of whether he planned to follow it up with a massed assault on Ukraine with the troops and heavy weapons gathered near the border.

On Feb. 23, Ukraine declared a state of emergency and told its citizens in Russia to leave the country, while Moscow began evacuating its Kyiv embassy and consulates in other Ukrainian cities.

Ukraine President Volodymyr Zelensky told reporters, “Predicting what might be the next step of Russia, the separatists, or the personal decisions of the Russian president … I cannot say.”