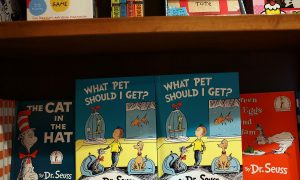 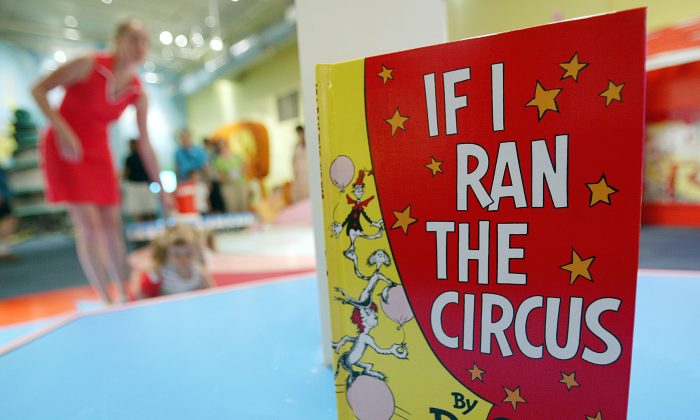 A Dr. Seuss book is seen as children play during a press preview of an interactive exhibition dedicated to Dr. Seuss at the Children's Museum of Manhattan July 6, 2004 in New York City. (Mario Tama/Getty Images)
Executive Branch

Biden Omits Mention of Dr. Seuss From ‘Read Across America Day’ Amid Concerns of Racist Undertones

President Joe Biden appears to have removed legendary children’s book author Dr. Seuss from “Read Across America Day,” which is observed on March 2, the birthday of author.

In a proclamation Monday, Biden declared Tuesday “Read Across America Day,” but left out mention of the children’s author, as has been presidential tradition in recent years. Presidents Donald Trump and Barack Obama both recognized the author in their respective proclamations during their time in office.

Read Across America Day was launched by the National Education Association (NEA) in 1998 to encourage children to read. The association had, until 2018, partnered with Dr. Seuss Enterprises, before the contract ended.

The White House didn’t immediately respond to a request for comment and clarification.

Dr. Seuss, whose real name was Theodor Seuss Geisel, was a lifelong liberal, included political satire in his children’s books, highlighting freedom and imagination and criticizing oppression, anti-Semitism, and even destruction of the environment.

During World War II he contributed political cartoons to the PM, a short-lived New York City liberal tabloid. Aside from anti-Nazi themes, one cartoon portrayed Japanese-Americans as traitors.

He had been the face of the annual event for more than two decades.

In 2017, First Lady Melania Trump celebrated the day by reading the author’s books to children in hospital, saying that his work has “brought so much joy, laughter and enchantment into children’s lives all around the globe for generations.”

“Through his captivating rhymes, Dr. Seuss has delighted and inspired children while teaching them to read, to dream, and to care,” she said at the time.

In his 2018 proclamation, Trump encouraged Americans to “always remember the still-vibrant words of Dr. Seuss: ‘You have brains in your head. You have feet in your shoes. You can steer yourself any direction you choose.’”

In Virginia, one of the largest school districts, Loudoun County Public Schools (LCPS), decided against celebrating the author’s books during Read Across America Day this year, citing “strong racial undertones in many books written/illustrated by him.”

The district pushed back against reports that it had outright banned the author’s books, saying that they are still available to be read by students in classrooms and libraries.

“Research in recent years has revealed strong racial undertones in many books written/illustrated by Dr. Seuss. Examples include anti-Japanese American political cartoons and cartoons depicting African Americans for sale captioned with offensive language,” the district said in a statement.

“Given this research, and LCPS’ focus on equity and culturally responsive instruction, LCPS provided this guidance to schools during the past couple of years to not connect Read Across America Day exclusively with Dr. Seuss’ birthday.

“Dr. Seuss and his books are no longer the emphases of ‘Read Across America Day’ in Loudoun County Public Schools,” the statement added.

LCPS said it instead encourages students to “read all types of books that are inclusive, diverse and reflective of our student community, not simply celebrate Dr. Seuss.”