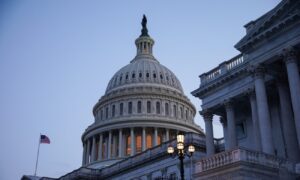 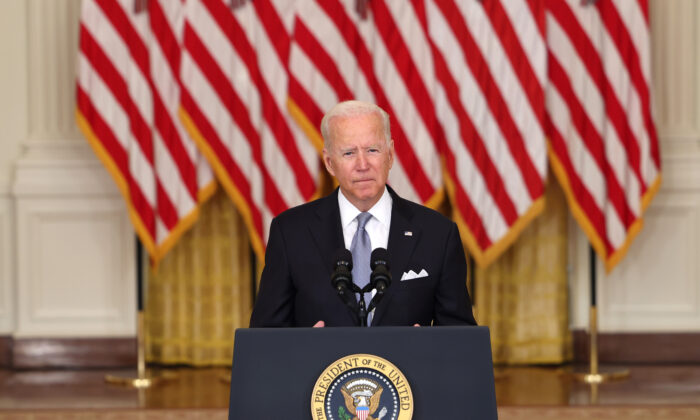 President Joe Biden delivers remarks on the worsening crisis in Afghanistan from the East Room of the White House in Washington on Aug. 16, 2021. (Anna Moneymaker/Getty Images)
International

Biden Denies Allies Are Questioning US ‘Credibility’ After Afghanistan Collapse

President Joe Biden downplayed concerns that the chaotic U.S. military withdrawal and ongoing evacuation in Afghanistan would damage his administration’s credibility around the world.

“I have seen no question of our credibility from our allies around the world,” Biden told reporters during a Friday press conference, adding that the “exact opposite” has happened.

Biden added that he’s spoken with the United States’ NATO allies and that other senior White House officials have spoken with their counterparties in recent days.

A number of world leaders and NATO partners have expressed shock or even criticized the United States in recent days over how the withdrawal is being handled. The UK Parliament this week voted to hold Biden himself in contempt for the Afghanistan pullout fracas.

“The American decision to withdraw was not just a mistake—it was an avoidable mistake, from President Trump’s flawed deal with the Taliban to President Biden’s decision to proceed, and to proceed in such a disastrous way,” said Liberal Democrat leader Ed Davey, according to The Telegraph.

“To see their commander in chief call into question the courage of men I fought with, to claim that they ran, is shameful,” said another Parliament member, Tom Tugendhat, the Tory chairman.

And German politician Armin Laschet, Chancellor Angel Merkel’s heir apparent, described the Afghan situation as “the greatest debacle that NATO has seen since its foundation” and called it “an epochal change that we are facing.”

This week, Biden has received significant bipartisan criticism over how his administration handled the evacuation and pullout, leaving more than 15,000 Americans in the country as the Taliban terrorist group took over Kabul on Sunday. Scenes of violence and chaos have been recorded at the Kabul airport, where U.S. military evacuation flights are ongoing.

All the while, Biden has received flack for not publicly admitting responsibility while going on vacation at Camp David and reportedly his home state of Delaware this week.

Evacuation flights on Friday were stopped for around eight hours, according to reporters on the ground, due to problems over how to transport refugees trying to escape. Flights resumed later in the day, Biden confirmed.

“We went in together and we’re leaving together,” Biden said Friday of his NATO allies. “And now, we’re working together to bring our people and our Afghan partners to safety.”

The president didn’t talk to British Prime Minister Boris Johnson until Tuesday, two days after the Taliban took over Kabul. He spoke with Merkel a day later and French President Emmanuel Macron on Thursday, according to White House-provided readouts of their phone calls.

“There’ll be plenty of time to criticize and second-guess when this operation is over, but now, let’s focus on the mission,” Biden said.

Also during his speech, Biden promised to the thousands of Americans inside Afghanistan that “we will get you home” and added the United States is committed to evacuating tens of thousands more Afghan nationals who worked alongside the U.S. military.

Administration officials have been questioned over public statements that appeared to affirm that the U.S. military is relying on the Taliban, designated by some federal agencies as a global terrorist network, to allow people inside the airport from the outside. Biden appeared to again confirm that the military is “in close contact with the Taliban to ensure civilian safety as they go to the airport.”

In Washington, some veterans in Congress were calling on the Biden administration to extend a security perimeter beyond the Kabul airport so more Afghans can make it to the airport for evacuation. They also wanted Biden to make clear an Aug. 31 deadline for withdrawing U.S. troops was not a firm one.

The deadline “is contributing to the chaos and the panic at the airport because you have Afghans who think that they have 10 days to get out of this country or that door is closing forever,” said Rep. Peter Meijer (R-Mich.), who served in Iraq and also worked in Afghanistan to help aid workers provide humanitarian relief.