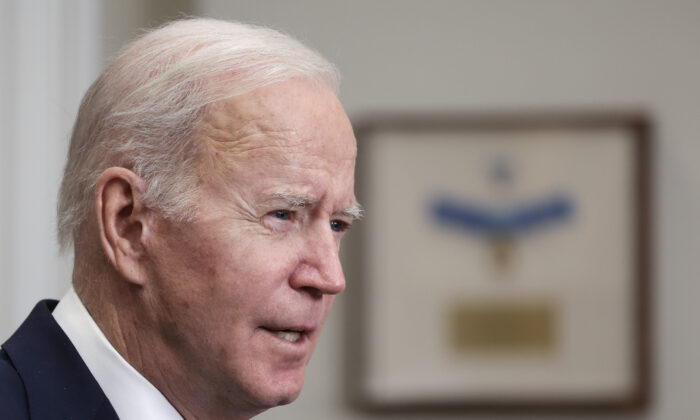 With the announcement of Supreme Court Justice Stephen Breyer’s retirement on Jan. 27, Biden said that he would fulfill a campaign promise by nominating the first-ever black woman to the high court and would do so by the end of February.

In an interview Thursday with NBC’s Lester Holt, Biden revealed that the list of candidates being considered is down to “about four.”

“I’ve taken about four people and done the deep dive on them, meaning the thorough background checks and see if there’s anything in the background that would make them not qualified,” said Biden in the interview Feb. 10.

Biden added that the remaining picks are all “incredibly well-qualified.”

Supreme Court appointments have been highly contentious political events in recent years, with nearly all Democrats voting to block former President Donald Trump’s three picks. But Biden, a Democrat, says he expects his pick to garner votes from across the aisle.

“Whomever I pick will get a vote from the Republican side for the following reason: I’m not looking to make an ideological choice,” said Biden.

Breyer, 83, has served as a Supreme Court Justice for more than 30 years. He was appointed by former President Bill Clinton, a Democrat, and is considered to be a part of the court’s liberal-leaning wing.

Some Republicans in Congress have expressed concerns that Biden might select a Justice meant to appease the progressive wing of the Democrat Party. Most Senate Republicans have consistently voted against his lower court nominees.

Biden met with Democrat members of the Senate Judiciary Committee Thursday. While multiple senators after the meeting said they expect the president’s choice to garner Republican votes, Sen. Richard Blumenthal (D-Conn.) had scathing remarks for the current makeup of the high court. Blumenthal said he expected the pick to bring together a “deeply divided” court that is “doing tremendous damage to the American judiciary right now, in real time, destroying its credibility.”

While the White House has revealed few details as to the selection process, some of the names reportedly being considered for the Supreme Court seat are: D.C. federal trial court judge Ketanji Brown Jackson, U.S. District of South Carolina Judge J. Michelle Childs, and California Supreme Court Justice Leondra Kruger.