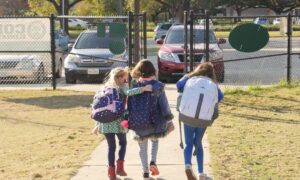 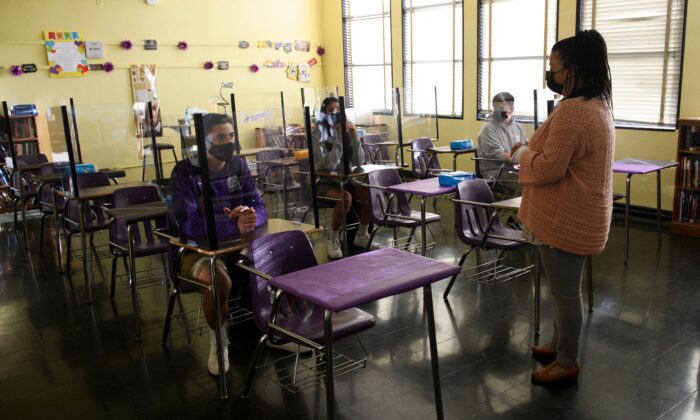 While President Joe Biden has met his school reopening goal almost a month ahead of schedule, data indicate his policies did nothing to accelerate a reopening trend that was already underway when he took office.

An effort to reopen the majority of schools within his first 100 days was among Biden’s core promises prior to taking office. When he finally put forward the specifics in mid-February, he said it meant having “close to” the majority of K–8 grades opened for in-person instruction five days a week by the end of April.

That goal has already been met, according to data from Burbio, a community tracking firm that crunches publicly available data collected from 1,200 school districts, representing 35,000 schools, in all 50 states, according to its website.

By March 8, more than 51 percent of grades K–8 were open for traditional in-person instruction, although looking at middle-school grades only, less than 41 percent were open.

In the week starting April 5, more than 55 percent of students will attend schools that offer traditional in-person instruction, including nearly 64 percent in elementary grades, over 50 percent in middle school grades, and nearly 47 percent in high schools.

The reopening trend started in early September 2020, when school lockdowns reached their zenith. Only 19 percent of students went to schools that offered traditional instruction, Burbio reported on Sept. 2.

The data show no clear indication that Biden policies sped up the reopening.

On Feb. 12, the Centers for Disease Control and Prevention (CDC) released school reopening guidelines that divided districts into blue, yellow, orange, and red zones based on local data regarding the spread of the CCP (Chinese Communist Party) virus.

In orange and red zones, only partial in-person instruction should have been allowed, according to the guidelines. But when Burbio crunched the data, virtually all American children lived in red and orange zones. They still do, in fact. School reopening proceeds despite the guidelines, it appears.

On March 19, the CDC allowed schools to reduce “social distancing” between students and staff from six feet to three feet. Some districts mentioned the guidelines in their decisions to allow more in-person instruction, according to Burbio. But the reopening data show no acceleration of the reopening trend.

Biden asked for and received from Congress nearly $130 billion for K–12 schools in his $1.9 trillion CCP virus relief bill. But Congress has already provided over $110 billion of relief to schools and “most of those funds remain to be spent,” the Congressional Budget Office (CBO) stated in February. The CBO projected that only about $6 billion of the new money would be spent this fiscal year, another $32 billion in 2022, and the rest in subsequent years (pdf).

Public school officials have been under pressure from parents and some politicians to reopen, particularly after health authorities said children are unlikely to spread the virus.

Many parents have struggled to cope with the added responsibility of providing an education for their children. Tax dollars that were supposed to pay for that service often bought them mere access to virtual lessons that did little to ensure the children paid any attention to it.

While some parents responded by organizing “pod schools,” where several children get together in a home to receive instruction from a hired tutor, even that was largely prohibited under the more draconian lockdowns in some states.

Update: The article has been updated with information about the CCP virus relief bill.