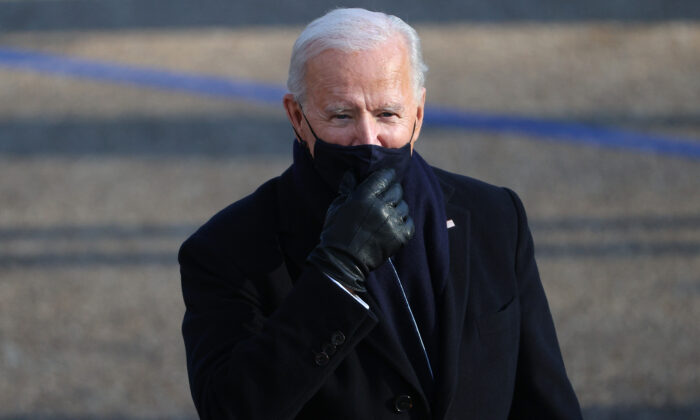 Biden Mandates Masks, Rejoins Paris Climate Accord, Among Other Executive Actions on First Day in Office

President Joe Biden on his first day in office took a total of 17 executive actions, including to mandate masks and having the United States rejoin the United Nations’ Paris Climate Accord.

The new president is mandating social distancing and the wearing of masks on federal property in a new executive order. He also launched a “100 Days Masking Challenge” to compel all Americans to wear a mask for the first 100 days of his administration, in efforts to prevent the spread of the CCP (Chinese Communist Party) virus, which causes the disease COVID-19.

Biden is also creating a “COVID-19 response coordinator” position to fill the role former Vice President Mike Pence played in the Trump administration’s Coronavirus Task Force, and will re-embed his COVID-19 pandemic response team within the National Security Council. He is also calling on Congress to pass extensions for COVID-19 aid, extend eviction and foreclosure moratoriums, and pause payments for federal loans, including student loans.

Biden took a few actions over policies to address climate change, including signing a document that allows the United States to rejoin the Paris Climate Accord within 30 days. He released a statement that said he will “hereby accept the [Paris] Agreement and every article and clause thereof on behalf of the United States of America.”

Former President Donald Trump first announced in 2017 his intention to withdraw from the Paris Climate Accord, calling the United Nations framework to tackle climate change it “a total disaster” for U.S. economy that was too lenient towards communist China and its greenhouse gases emissions.

The United States formally left the climate agreement on Nov. 4, 2020, but Biden on Nov. 5, 2020 vowed he would have the country rejoin the agreement once he came into office. Former President Barack Obama had the United States join the accord during the final months of his administration in 2016. At the time, he said that the fight against climate change is not one that “any one country, no matter how powerful, can take alone.”

In a separate executive order, Biden directed federal agencies to review and address actions taken by the Trump administration on the environment or public health. The order involves a number of other action items, including revoking authorization for the Keystone XL oil pipeline, and placing a moratorium on Arctic oil and gas leasing.

Biden is also having the United States rejoin the United Nations’ World Health Organization, reversing another Trump decision for the country to leave the WHO after criticisms over the body’s handling of the CCP virus outbreak from Wuhan.

A number of actions to promote equality of outcome according to an individual’s social identity were also signed on Jan. 20, including an executive order that Biden’s team said would “advance racial equity,” and an executive order that disbands the Trump administration’s 1776 Commission that sought to promote national unity through education about America’s founding principles over “historical revisionism” that the Commission said tackles claims of systemic racism with “more discrimination.”

Biden also signed an executive order that directs the government to interpret the Civil Rights Act as one that prohibits workplace discrimination, including on the basis of sexual orientation and gender identity, and not just race, color, religion, sex, and national origin.

The president also took a slew of other actions addressing immigration on his first day. These include a memorandum that directs the Department of Homeland Security and Department of Justice to preserve and fortify the Deferred Action for Childhood Arrivals (DACA) program, an executive action to repeal the Trump administration’s restrictions for passport holders from seven terror-prone countries, and an executive order that reverses Trump’s decision to exclude illegal immigrants from the Census. He also pushed out a memorandum to further extend temporary protected status and working authorization to Liberians granted refuge in America before 2007.

Biden also signed an executive order that seeks to reverse Trump’s immigration enforcement and “reset the policies and practices” to align enforcement with the Biden administration’s “values and priorities.” Part of the order involves revoking Trump’s Executive Order 13768 signed in 2017, which withheld federal funding from so-called “sanctuary cities” that do not cooperate with federal immigration authorities.

He signed a separate proclamation to pause the building of the U.S.-Mexico border wall and determine how to divert funds previously assigned to the effort.

Biden signed two other separate executive orders on Jan. 20. One addressed new ethics commitments for executive branch appointees aimed at maintaining “public trust in government,” and the other focused on reviewing executive branch regulatory actions in a way that ensures the promotion of the administration’s values informed by public engagement with relevant stakeholders.