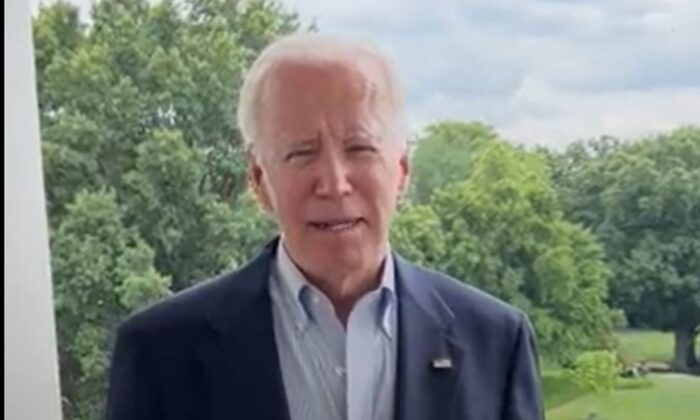 President Joe Biden appeared in a video to speak about his COVID-19 case that was uploaded to his Twitter account on July 21, 2022. (President Joe Biden/Twitter screenshot via The Epoch Times)
Executive Branch

President Joe Biden issued his first comment after he was diagnosed with COVID-19 earlier on Thursday, saying he’s doing “fine” and “keeping busy.”

“Folks, I’m doing great. Thanks for your concern. Just called Senator Casey, Congressman Cartwright, and Mayor Cognetti (and my Scranton cousins!) to send my regrets for missing our event today. Keeping busy!” he wrote on Twitter.

Later, Biden’s account posted a video showing the 79-year-old president speaking at the White House. “Hey folks, I guess you heard,” he stated. “This morning I tested positive for COVID.”

Biden, who has received four COVID-19 vaccine doses, noted that he was “double vaccinated” and “double boosted.”

“Symptoms are mild. And I really appreciate your inquiries and concerns. But I’m doing well, getting a lot of work done. Going to continue to get it done,” he added.

It’s the first confirmed time that Biden has contracted the virus. Because of the president’s advanced age, he is considered to be in the at-risk group in terms of developing severe COVID-19.

The White House said that Biden is taking the Pfizer-made drug Paxlovid, which health officials said earlier this year can cause a relapse of COVID-19 symptoms even after a negative test is returned.

White House COVID-19 advisor Anthony Fauci contracted the virus and later confirmed he was taking the same drug, Paxlovid, before suffering a return of symptoms after testing negative for several days.

“After I finished the five days of Paxlovid, I reverted to negative on an antigen test for three days in a row,” Fauci said in late June. “And then on the fourth day, just to be absolutely certain, I tested myself again. I reverted back to positive.”

Earlier that month, Centers for Disease Control and Prevention (CDC) sent an alert warning about so-called “COVID rebound,” meaning that patients could potentially develop a recurrence of symptoms after taking Paxlovid. A study released by the University of California at San Diego alleged that the rebound may be because not enough of the drug reaches infected cells to prevent the virus from replicating.

The president’s diagnosis, meanwhile, is sure to draw more scrutiny against federally approved COVID-19 vaccines’ effectiveness at preventing transmission of the virus despite widespread mandates that coerced people into receiving the shots. A study published in the New England Journal of Medicine in June linked two doses of a COVID-19 vaccine to negative protection against Omicron subvariants.

About a year ago, Biden told reporters that vaccinated individuals can’t contract COVID-19, which turned out to be an incorrect prediction.

“But again, one last thing … we don’t talk enough to you about this, I don’t think. One last thing that’s really important is: We’re not in a position where we think that any virus—including the Delta virus, which is much more transmissible and more deadly in terms of  …. unvaccinated people … the various shots that people are getting now cover that. They’re—you’re okay. You’re not going to — you’re not going to get COVID if you have these vaccinations,” he said exactly one year ago on July 21, 2021, according to a White House transcript.

On Wednesday, Biden visited Somerset, Massachusetts, to speak about climate executive rules that he will hand down in the coming days after traveling there via Air Force One.