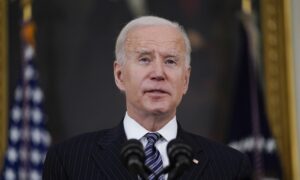 The Biden administration’s claim that a lack of gun control in the United States contributed to the historic spike in homicides in 2020 is “just bizarre,” according to a prominent economist.

John Lott, the president of the Crime Prevention Research Center, told The Epoch Times “American Thought Leaders” program that there hasn’t been a visible change in the direction of gun laws that could have caused a spike in homicides in urban areas across the United States last year.

His remarks come after the White House released a fact sheet outlining a list of six initial executive actions that the Biden administration has argued would help combat what it calls a “gun violence public health epidemic.”

According to Mark Bryant, founder of The Gun Violence Archive which uses media reports to track shootings in real-time, there were nearly 4,000 more gun homicides last year compared with 2019.

The outlined proposals contain two orders that drew his particular attention: a Justice Department (DOJ) rule aimed at stopping the proliferation of “ghost guns,” and the ordering of the DOJ to publish model “red flag” legislation.

Those proposals follow the U.S. House of Representatives in March approving a pair of Democrat-backed gun control bills aimed at expanding background checks.

“I’d like to know what gun control rules changed last year that caused the spike across all these urban areas across the country,” said Lott, author of “Dumbing Down the Courts: How Politics Keeps the Smartest Judges Off the Bench.”

Lott, who holds a doctorate from the University of California at Los Angeles, outlined a number of other factors that he believes contributed to the high homicide rates last year.

“You had jails and prisons across the country, many of them even releasing more than half or more of the inmates that they had; you had police being ordered to stand down and not doing their jobs,” said Lott. “You had funding cut for police, you had prosecutors in major urban areas refusing to prosecute criminals.”

He added, “It’s not rocket science. If you make it less risky for criminals to go and commit crime, guess what, you’re going to have a lot more crime than you would have had otherwise.”

The measures President Joe Biden introduced on April 8 largely limit the availability of certain guns and accessories and encourage states to adopt “red flag laws,” which allow family members or law enforcement to ask a court to bar people from possessing guns if they show signs of being a threat to themselves or others.

One of the executive orders seeks to restrict “ghost guns,” or homemade, unregistered firearms usually built from a kit that could be ordered online. Another order restricts the sale of stabilizing braces designed to increase the accuracy and reduce the recoil of pistols, making them behave more like rifles.

Lott said, “it’s sad” that Biden is attempting to push the blame for high homicide figures on lack of gun control, adding that he believes Biden’s proposals will “make it worse” for minorities living in urban areas in the United States, as they are often the victims of violent crimes.

“The types of proposals that Biden wants to have is actually going to make it worse for those minorities,” Lott said.

“If he really wants to go and help them—having more police there, having prosecutors that actually prosecute violent criminals. Who do you think are the victims of these violent crimes? They’re overwhelmingly minorities.”

Lott added, “You want to make it risky for criminals to go and commit crimes against those minorities.”

Referring to the riots and protests that have erupted in the wake of the death of 20-year-old Daunte Wright in Brooklyn Center, Minnesota, on Sunday, Lott noted that a number of businesses have been looted and destroyed in heavily minority areas.

He added, “Biden blaming this on gun control, not having enough gun control last year, having a change somehow, it’s sad.”

According to the National Shooting Sports Foundation, a record number of 21 million firearms were purchased in the United States last year.

The White House has signaled that the president is likely to issue more executive orders on guns in the future.