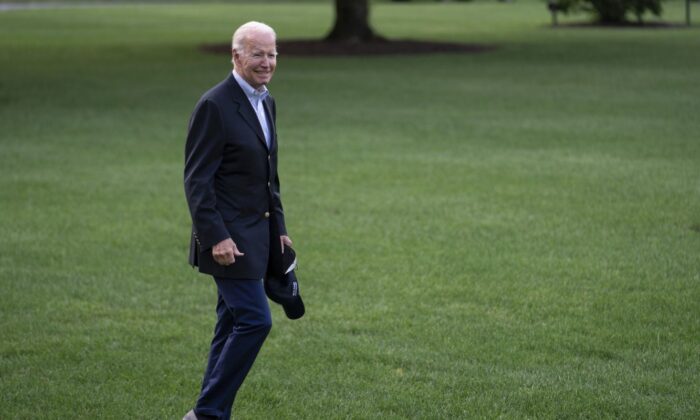 U.S. President Joe Biden walks along the South Lawn of the White House to Marine One for a trip to Delaware on Aug. 7, 2022 in Washington. (Sarah Silbiger/Getty Images)
Executive Branch

President Joe Biden was officially cleared to emerge from isolation on Aug. 7 after he tested negative for COVID-19 for the second day in a row, according to his physician.

“This morning, the president’s SARS-CoV-2 antigen testing was negative for a second consecutive day,” White House physician Kevin O’Connor wrote in an Aug. 7 memo (pdf), referring to COVID-19. “He will safely return to public engagement and presidential travel.”

The president returned a negative test for the first time in about a week on Aug. 6. He remained in quarantine until the morning of Aug. 7, before leaving for Rehoboth Beach, Delaware, where he owns a home, according to pool reporters.

When departing the White House, Biden told reporters that “I’m clear” and that he was “feeling good,” according to footage.

Biden hadn’t left the White House since July 21, when he first tested positive for the virus. As he was taking a five-day course of Paxlovid, he tested positive after several days of negative tests, sparking concerns and questions about how common so-called Paxlovid rebound cases are.

Biden’s vital signs stayed normal throughout his initial COVID-19 diagnosis and rebound infection. The 79-year-old’s symptoms included a cough, a sore throat, aches, and a runny nose. At one point, he developed a mild fever, according to his doctor.

According to the Centers for Disease Control and Prevention’s (CDC) guidelines, “People with recurrence of COVID-19 symptoms or a new positive viral test after having tested negative should restart isolation and isolate again for at least 5 days.”

The president is scheduled to visit Kentucky on Aug. 8 to view recent flood damage and meet with locals.

The CDC issued an alert to doctors and health providers on May 24 stating that COVID-19 symptoms may come back in patients taking Paxlovid, a drug that was given emergency use authorization by the Food and Drug Administration late last year.

“If you take Paxlovid, you might get symptoms again,” CDC Director Dr. Rochelle Walensky told CBS News in late May. “We haven’t yet seen anybody who has returned with symptoms needing to go to the hospital. So, generally, a milder course.”

White House officials, including COVID-19 czar Dr. Ashish Jha, have signaled that Paxlovid rebound cases are rare, and when they do occur, symptoms are generally mild. But in late July, several prominent scientists publicly questioned clinical trial data offered by Pfizer regarding instances of rebounds, with one suggesting that it could be as high as 40 percent. Pfizer stated that 1 percent to 2 percent of Paxlovid users experience a recurrence of COVID-19 symptoms and positivity.