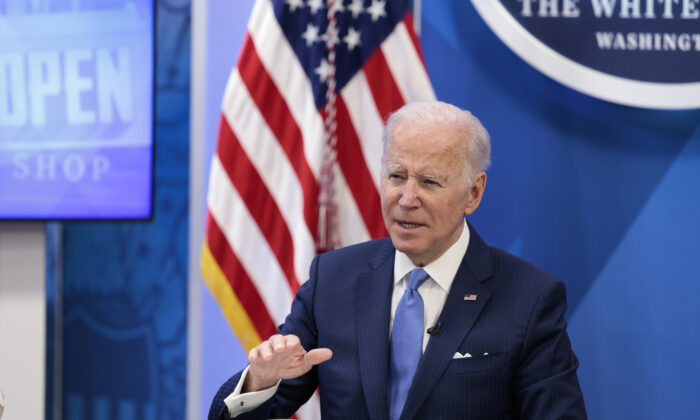 President Joe Biden says that if the Supreme Court moves to overturn Roe v. Wade, it would represent a “fundamental shift in American jurisprudence.”

A draft majority opinion written by Justice Samuel Alito—leaked to the press and published by Politico May 2—suggests the Supreme Court has decided to strike down the 1973 decision that made abortion legal throughout the United States.

The authenticity of the document was later confirmed by Chief Justice John Roberts, who issued a statement calling the leak “a betrayal of the confidences” of the Supreme Court.

Were Roe v. Wade to be overturned, it would return the regulation of abortion to the states—about half of which have indicated an intent of banning or limiting abortions.

“If the rationale of the decision as released were to be sustained, a whole range of rights are in question,” Biden told reporters before boarding Air Force One. “And the idea we’re letting the states make those decisions, localities make those decisions would be a fundamental shift in what we’ve done.”

Biden points to the Ninth Amendment and the right to privacy when arguing in favor of Roe. He had issued a statement earlier in the day reaffirming his administration’s support for “a woman’s right to choose” and calling on Congress to codify the ruling into law.

“I mean, there are so many fundamental rights that are affected by that,” Biden said. “I’m not prepared to leave that to the whims … of the public at the moment in local areas.”

The Women’s Health Protection Act (WHPA) was introduced in the Senate last year seeking to codify Roe but did not have the votes to move forward.

Biden seemed to indicate his aspirations of codifying Roe fall short of making changes to the filibuster law when he said “I’m not prepared to make those judgments now about” it.

White House press secretary Jen Psaki later pointed out that even if the filibuster law had been overturned there wouldn’t have been enough votes to push the WHPA through.

The Senate will vote during the week of May 9 on a bill that would codify access to abortion into law if passed, Senate Majority Leader Chuck Schumer said Tuesday.

Also at issue is the unprecedented leak from the Supreme Court. Republican members of Congress have called it a violation of the law and a breach of the high court’s process, demanding to know the identity of the individual who leaked the document.

John Malcolm, Vice President of the Heritage Foundation’s Institute for Constitutional Government, told The Epoch Times that while there have been some leaks at the Supreme Court in the past, there has never been the case of a draft opinion circulated in public. He says the intent of the leak is clearly to “invoke a reaction and intimidate Supreme Court justices to try to get them to change their positions before the opinion is issued.”

He said it is “not completely clear” whether the leak itself constitutes a crime as Supreme Court opinions are sensitive and confidential, but they are not classified and there are no national security concerns with them being leaked.

However, he added there are some federal laws that could apply, depending on who the leaker is.

When asked aboard Air Force One Tuesday about the leak, Psaki seemed to indicate that the issue of protecting Roe takes priority over the leak for the president.

“There’s no question that [the leak] raises eyebrows for many in the country, including those of us in the White House,” said Psaki. “But what our focus is on right now beyond the leak is how we’re going to protect a woman’s right to make choices about her health care with her doctor.”