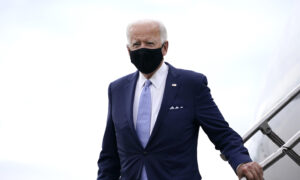 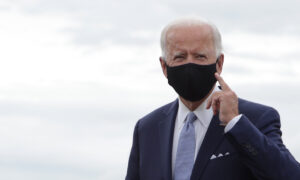 Biden Not Appearing in Public for Entire Day, Campaign Says
0

Former Vice President Joe Biden maintains a 4 percent lead over President Donald Trump, according to an Epoch Times national poll conducted by Big Data Poll. However, the poll showed a significant surge for Trump in the three days following the Republican National Convention.

The poll, which was conducted in two waves, showed that Biden held a 9-point lead (47–38) during the convention, but the trend reversed into a 2-point lead for Trump (46–44) in the three days following the event. The poll surveyed a first wave of likely voters from Aug. 26–28 and a second wave from Aug. 28–30, with the convention taking place on Aug. 24–27.

The combined poll, with both waves included, shows the Democratic presidential nominee leading 45 to 41 percent, with 11 percent undecided. When asked, however, who they believe will win the presidential election in November, an identical percentage of respondents (45 to 41) said Trump will win.

Research by Brookings Institution and others suggests that voters’ expectations of who will win a presidential election can often hold more predictive value than voters’ intentions, said Rich Baris, director of Big Data Poll.

“With the conventions behind us, former Vice President Joe Biden now holds a modest lead over President Donald Trump. But as August came to an end, Mr. Biden was struggling to hold onto a once sizable advantage as voters shifted their attention to recent events,” Baris said.

“Mr. Biden’s edge with seniors has slipped, and the president is outperforming his minority vote share from 2016 by a modest but statistically significant degree.”

Biden led Trump among all age groups except for those 65 and over, according to the combined poll.

The Republican National Convention (RNC) featured a roster of prominent Republican speakers, new faces from the Republican Party, and small-business owners, among others. The event culminated in a nomination acceptance speech delivered by Trump on the White House lawn and fireworks over the National Mall.

Forty-six percent of the voters surveyed in the combined poll approved of Trump’s job performance, compared to 50 percent who disapproved. The result was exactly the opposite if counting only the second wave of polling after the RNC.

In the combined poll, Biden led among female voters 49 percent compared to Trump at 35 percent, while Trump led with male voters 46 percent to 41 percent. In rural America, where voters are currently the most enthusiastic about voting in November, the president led 52 percent to 36 percent. Biden led by only six in the suburbs, 46 percent to 40 percent, but by 17 points in urban areas, 51 percent to 34 percent.

Biden led among black and African American voters, garnering 67 percent support. Trump captured 12 percent, a modest but statistically significant improvement from the 8 percent he received in 2016. The same is true of Hispanic voters, who backed Biden 54 to 32 percent. White voters backed Trump 49 to 39 percent, while Asian voters backed Biden 60 to 17 percent.

“It is not uncommon for demographic groups to flirt with the idea of voting for a different party, nor is it uncommon for them to return home before Election Day. But the movement in late August was toward the president in every racial group except for Asian voters,” Baris said. “The question remains whether his outperformance with minorities will hold and be enough to offset his smaller margin with white voters if the former vice president arrests the current bleeding.”

Baris previously told The Epoch Times that striking the accurate party affiliation breakdown and gauging the likelihood of a person’s voting is important to ensure the faithfulness of the poll.

The Epoch Times National Poll was conducted by Big Data Poll and interviewed 2,169 likely voters nationwide sourced via voter file-verified online survey panels from Aug. 26 to Aug. 30, 2020. The sampling error is plus or minus 2.1 percent at a 95 percent confidence interval projecting the electorate at 145 million. The results were weighted based on gender, age, race, education, and region.