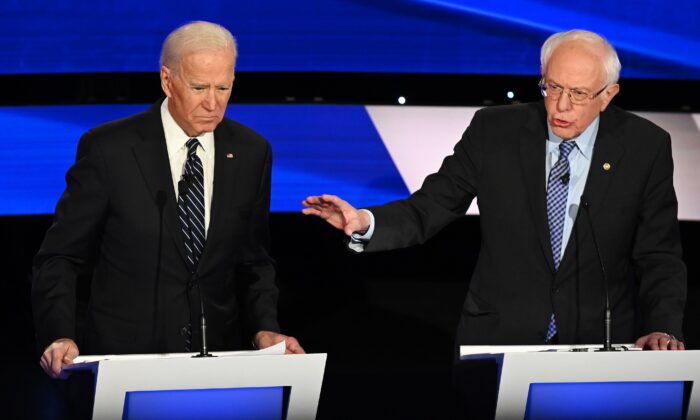 Biden: It Was a ‘Mistake’ to Trust Bush on Iraq War

Former Vice President said that it was a “mistake” to trust the President George W. Bush administration on whether they were going to war with Iraq.

Biden, 77, was a senator and Chair of the Senate Foreign Relations Committee in 2002 when he voted in favor of a resolution that authorized Bush to use military force against Iraq. Speaking to lawmakers before the vote, Biden said that “failure to overwhelmingly support” the resolution was “likely to enhance the prospects that war will occur.”

He voiced support for the invasion of Iraq for years until saying, for the first time in 2005, that the vote was “a mistake.”

After the war started, Biden said, “I was in a position of making the case that it was a big, big mistake.”

Sen. Bernie Sanders (I-Vt.), 78, who has repeatedly criticized Biden over his vote for the resolution, said of Bush and Bush’s Vice President Dick Cheney: “I thought they were lying.”

“I did everything I could to prevent that war. Joe did things differently,” he added.

South Bend Mayor Pete Buttigieg, who served in the military, later said he gained crucial experience during that time.

“There are enlisted people that I serve with barely old enough to remember those votes,” he said.

Buttigieg said that people in charge would need to draw on experience, adding: “For me, those lessons of the past are personal.”

“We have to stop this mindset that we can do everything with combat troops,” she said. “Us keeping combat troops there aren’t helping.”

Also on the debate stage was billionaire Tom Steyer.

There are four debates in early voting states. The next debate is to take place on Feb. 7 in Manchester, New Hampshire, followed by another in Las Vegas, Nevada, on Feb. 19 and another in Charleston, South Carolina, on Feb. 25.