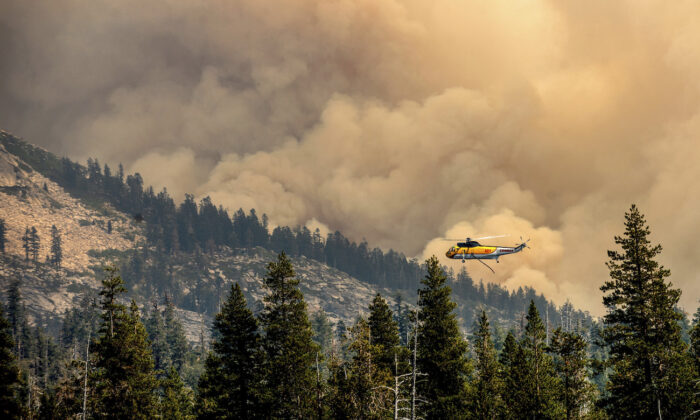 A helicopter flies over Wrights Lake while battling the Caldor Fire in Eldorado National Forest, Calif., on Sept. 1, 2021. (AP Photo/Noah Berger)
US News

President Joe Biden has declared an emergency in California as the Caldor Fire continues to threaten homes and businesses near Lake Tahoe, fuelled by powerful winds and dry conditions.

The declaration authorizes coordination of disaster relief measures by the Department of Homeland Security (DHS) and Federal Emergency Management Agency (FEMA), the White House said in a statement.

“We thank President Biden and Vice President Harris for their steadfast support to California as we battle these challenging fires,” Newsom stated. “Our continued partnership with the federal government is critical to protecting communities and ensuring impacted Californians have the supports they need to get back on their feet.”

The declaration, approved just hours after Newsom submitted the request, will supplement state, local, and tribal government emergency services for the protection of lives, property, and public health and safety, the governor’s office said in a news release.

The president previously declared disasters in counties of Lassen, Nevada, Placer, and Plumas for the Dixie and River wildfires.

According to the White House, the DHS and FEMA are now authorized to “identify, mobilize, and provide at its discretion, equipment and resources necessary to alleviate the impacts of the emergency.”

Although favorable weather helped firefighters working to save communities on the south end of Lake Tahoe from the approaching wildfire on Sept. 1, officials warned that stiff winds and dry conditions would mean that homes in the California-Nevada alpine region are still in danger.

“Finally, some good news on the weather side of things here on this fire,” Jim Dudley, a meteorologist assigned to the fire, said at a Sept. 1 briefing. Winds were expected to calm significantly over the next several days, he said, but risks remain with the extremely low humidity.

Crews try desperately to keep flames away from urban communities, where houses are close together, and shopping centers, hotels, and other structures would provide even more fuel for a fire that has so far been feeding on trees, grasses, and scattered homes and cabins.

“We’re still not out of the woods. The fire is still moving,” Herrera said.

Since it began on Aug. 14, the blaze has destroyed at least 700 homes and other structures and scorched through nearly 320 square miles. It still threatens at least 33,000 more homes and structures. It was 20 percent contained on Sept. 1.