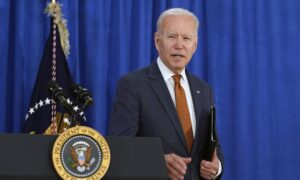 President Joe Biden at the White House in Washington on April 15, 2021. (Jim Watson/AFP via Getty Images)
Thinking About China

American investors will have to tread carefully in considering Chinese companies for their portfolios. On June 3, President Biden signed an Executive Order expanding Trump era restrictions on U.S. capital from resourcing Chinese companies, including subsidiaries, that form part of China’s military-industrial complex. This is as much a religious freedom and human rights sanction as a national security one.

The new order reaffirms that the Chinese Communist military poses an “ongoing national emergency” and prohibits U.S. persons from investing in “Chinese companies that undermine the security or democratic values of the United States and our allies.” Identifying 59 Chinese companies in the new list of prohibited entities, Biden’s Order explicitly singles out the threat posed by Chinese surveillance technology outside China, and that is used to facilitate repression or serious human rights abuses.

China’s surveillance technology, the use of which Biden calls “unusual and extraordinary threat,” is becoming the primary means by which Beijing is forcing ideological conformity with Chinese Communist Party (CCP) policies and practices on the grassroots level at home. No longer must the Party rely on neighborhood cell informants and factory floor commissars, whose commitment to spying on their family, friends and neighbors might not be sufficiently zealous. Regional differences seen in the strictness of CCP directives’ enforcement will be a thing of the past. As the pontifical Aid to the Church in Need states in its Religious Freedom in the World Report 2021, this high-tech surveillance makes ‘Big Brother’ look like an amateur.

Facial- and gait-recognition cameras bristle on street corners and parks, and inside churches, mosques and temples. Personal devices can now be remotely scanned by police. Propaganda apps, such as “Study the Great Nation,” downloaded under state pressure by over 100 million Chinese, come with back doors for “super-user” access by the CCP. China is erecting a technological web to comprehensively police every person, at all times. Algorithms used to feed resulting data into a state system of rewards and punishments will eventually impact everyone—all without any transparency, standards for fairness, due process or right to appeal.

This monstrous surveillance system is being perfected in the western Uyghur Muslim region of Xinjiang. Two years ago, Uyghur representatives told me that CCP officials were capable of scooping up Uyghur individuals’ smartphone data, including contact information and photographs, as owners walked by on the street without their having to give up security codes or even knowing it. Along with other suppression, this facilitated Beijing’s attempt to cover up its religious and ethnic genocide of these people for several years. The ubiquity of state cameras and surveillance technology in Urumqi, the regional capital, four years ago earned it the distinction as the most closely surveilled place on Earth.

Tibet is now the site of more ominous surveillance measures. In Bitter Winter, Tibetan expert Tenzin Dalha writes that not only are Tibetans “continuously controlled through camera networks and artificial intelligence” but Huawei’s highest 5G base station positioned on Mount Everest will also advance international cyber-espionage, international data theft, and domestic spying out of global digital networks, as well as a range of military purposes.

Christian churches, that is, the ones that are submitting to CCP control through so-called Patriotic umbrella organizations, are also being closely monitored with facial recognition cameras, inside and out. The formerly large Zion Church in Beijing shut down rather than submit to having government cameras mounted on its pulpit. Its pastor, Dr. Ezra Mingri Jin was detained and searched, and then has been banned for the past three years from flights out of the capital as punishment, though he was never charged or tried. His daughter has been similarly banned from travel to the United States where she planned to study law.

The case of Catholic Bishop Vincent Guo of Mindong diocese, in Fujian Province, offers another example. For refusing to join the Patriotic Church, the bishop was evicted from his home on Jan. 15, 2020, the day that China initiated its highest-level emergency response to the coronavirus. The 61-year-old prelate was forced to sleep on the doorstep of the church administrative building. Under international pressure, the CCP allowed him to regain access to his apartment, but shut off its running water, heat, and electricity. With every movement monitored, Bishop Guo could no longer carry out his ministry and returned to his home village to pray in solitude.

This insidious surveillance-based social credit score system was deemed so successful that the CCP rolled it out as official policy for religious affairs on May 1. Religious groups are the largest ideological organizations left in China distinct from the CCP and are seen as a threat by the regime. The new administrative rules for religious affairs require religious leaders to actively support the CCP, its leadership and core values, including in sermons. The rules specify that those entering houses of worship “be regulated through strict gatekeeping, verification of identity, and registration.” No one under 18 is allowed. A new government database will list the names of legal religious leaders and regulate their behavior through a system of “rewards” and “punishments.”

China’s high-tech surveillance is the basis of a new bloodless and silent method of repression that draws little external notice, while efficiently smothering any political dissent, religious practice, knowledge, and ideas independent of the CCP line or criticism of Chinese leader Xi Jinping. China is selling it to authoritarians internationally as it offers its political model as a superior alternative to Western liberal democracy.

Nina Shea is a senior fellow at the Hudson Institute where she directs the Center for Religious Freedom.

Nina Shea
Follow
Nina Shea is a senior fellow at the Hudson Institute where she directs the Center for Religious Freedom. For twelve years, she served as a commissioner on the U.S. Commission on International Religious Freedom. An international human-rights lawyer for over thirty years, Ms. Shea undertakes scholarship and recommends policies for the advancement of individual religious freedom and other human rights in U.S. foreign policy. She advocates extensively in defense of those persecuted for their religious beliefs and identities and on behalf of diplomatic measures to end religious repression and violence abroad, whether from state actors or extremist groups.
TOP NEWS