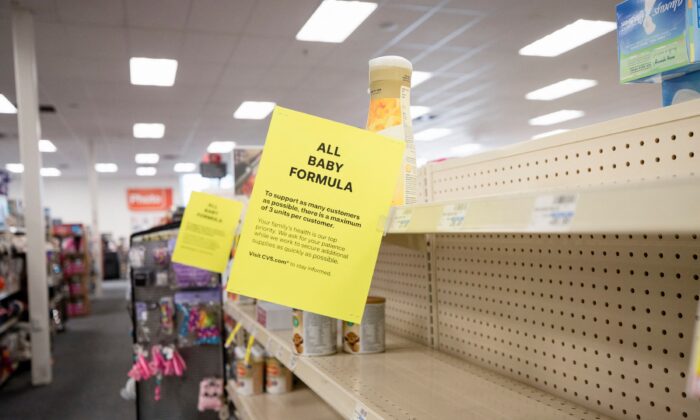 Empty shelves show a shortage of baby formula at a CVS store in San Antonio, Texas, on May 10, 2022. (Kaylee Greenlee Beal/Reuters)
Executive Branch

President Joe Biden invoked the Defense Production Act (DPA) on Wednesday to accelerate the production of U.S.-made infant formula amid a nationwide shortage of this critical food and reports of infant deaths resulting from the shortage.

“Directing firms to prioritize and allocate the production of key infant formula inputs will help increase production and speed up in supply chains,” the statement reads.

In addition, the statement said that Biden had directed federal agencies to use commercial cargo aircraft to transport infant formula that meets U.S. health and safety standards to America in a newly launched operation called Operation Fly Formula.

The announcement comes days after the Biden Administration announced additional steps to address a nationwide infant formula shortage after Abbott Nutrition, the largest baby formula manufacturer in the country, initiated a recall campaign for several of its products due to bacterial contamination concerns.

These included “cutting red tape” to increase manufacturers’ ability to meet demand and distribute formula, increasing the supply of formula through increased imports, and working with state attorneys to monitor and prevent predatory pricing, according to a White House statement dated May 12.

Meanwhile, the head of the U.S. Food and Drug Administration (FDA) has agreed with Abbott on plans for returning the infant formula manufacturer to normal production capacities and says the Abbott’s Michigan facility could be up and running as early as the end of May.

“We now have a path forward,” FDA Commissioner Robert Califf told NBC News on May 16. “Abbott is responsible for the timeline, but I’m very comfortable with what they said about two weeks … That’s entirely within the realm of possibility, and I think quite likely.”

“The administration remains in close touch with manufacturers and retailers to identify transportation and logistical needs to increase the amount and speed of FDA approved formula being shipped into the country, and ensure that formula is quickly moving from factories to retailers,” the White House said on Wednesday.