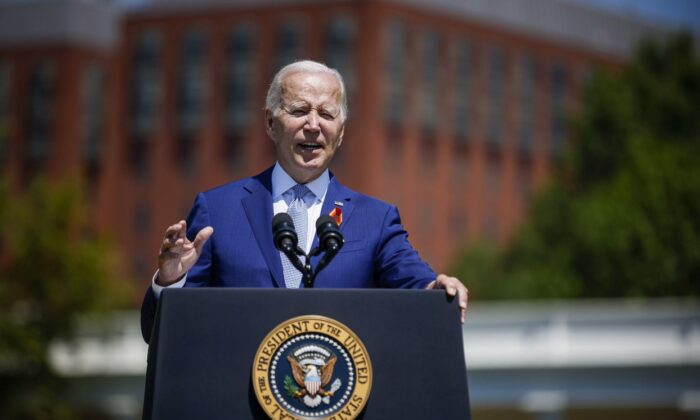 President Joe Biden delivers remarks at an event to celebrate the Bipartisan Safer Communities Act on the South Lawn of the White House in Washington, on July 11, 2022. (Chip Somodevilla/Getty Images)
Executive Branch

President Joe Biden was interrupted on Monday during an event that highlighted the passage of a new gun control law.

Manuel Oliver, the father of Parkland shooting victim Joaquin Oliver, began speaking as Biden spoke about the bill on the White House grounds. He was eventually escorted out of the event.

“Because make no mistake—” Biden said when he was attempting to hear what Oliver had to say. “Sit down, you’ll hear what I have to say, if you think—” Biden added.

According to footage of the event, Oliver appeared to be suggesting that the gun control bill doesn’t go far enough, saying that “I’ve been trying to tell you this for years, for years.”

“We have one, let me finish my comment … let him talk, let him talk,” Biden said before White House staff escorted the man out of the event.

Earlier on Monday, Oliver suggested to CNN that he would interrupt the event.

“It’s been a while that I’ve been calling out that using the words celebration, getting together, it’s like we’re going to a party, to a wedding today, you know, we all received invitations,” he said in the interview, referring to terms that were used to describe celebrating the passage of the gun control law.

Pro-Second Amendment lobby groups, however, said the latest measure, which was backed by 15 Republican and all Democrat senators, will further limit Americans’ constitutional right to obtain firearms.

“We should relentlessly hold accountable the Senators” who voted to pass the bill, Gun Owners wrote. “But we should thank the Republican Senators who are NOT listed, as they stood up for our 2A rights and voted against this horrible bill.”

The group, in particular, took umbrage with the law providing more funding to states to enforce red flag laws, which it asserted violates the Fifth Amendment’s right to due process.

“Red Flag Gun Confiscation Laws let law enforcement seize your firearms based on an anonymous ‘tip’ that you could pose a danger to society,” Gun Owners wrote after the House voted to pass the bill in June. “There won’t be a trial. You won’t have a single chance to defend yourself. Instead, a SWAT team would show up in the middle of the night to demand you hand over your lawfully owned firearms, no questions asked.”

Also Monday, Biden called for Congress to renew the 1994 Assault Weapons Ban and called for bans on so-called “high capacity magazines,” generally defined as magazines that hold more than 10 rounds.