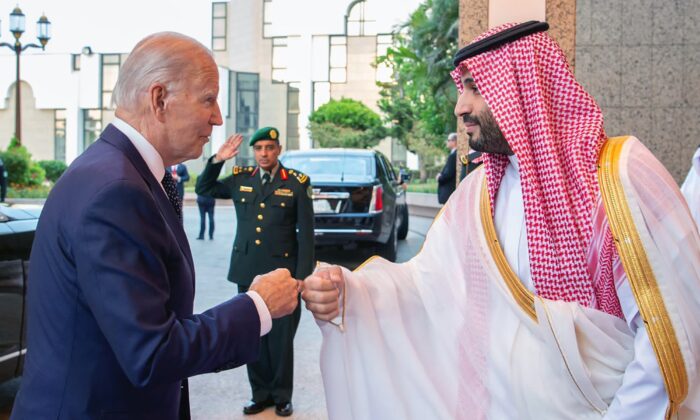 After arriving home in Washington, D.C. on Sunday, Biden was asked by a reporter about a comment from the Saudi foreign minister, Adel al-Jubeir.

“The Saudi foreign minister said he didn’t hear you accuse the crown prince of Khashoggi’s murder. Is he telling the truth?” the reporter asked the president.

“No,” Biden said quickly. “Why don’t you talk about something that matters?” the president then told journalists, as another one asked him about bumping fists with the Saudi crown prince, the de facto leader of the Muslim kingdom, who is sometimes referred to as “MBS.”

Biden added, “I’m happy to talk about something that matters.”

Days before that, at a news conference, Biden claimed that he spoke about the death of Khashoggi several years ago. After his death in 2018, a number of mainstream media outlets often featured the death as front-page news, and those outlets also attempted to tie his killing to the Trump administration. Federal agencies have suspected the Saudi government was involved in his death.

“With respect to the murder of Khashoggi, I raised it at the top of the meeting, making it clear what I thought of it at the time and what I think about it now,” Biden said during a press conference on July 15. “He [Crown Prince Salman] basically said that he was not personally responsible for it. I indicated that he was, and he said he was not personally responsible for it and he took action against those who were responsible,” Biden also said.

What the Minister Said

“I didn’t hear that particular phrase,” al-Jubeir remarked. “The president mentioned that the U.S. is committed to human rights because since the Founding Fathers wrote the Constitution and he also made the point that American presidents—this is part of the agenda of every American president.”

Biden’s apparent lack of public criticism about the Saudi government and the fist bump was panned by legacy media, including The Washington Post, which issued a rare critical statement about the president.

The White House signaled that Biden was in Saudi Arabia in a bid to push the Saudi government into producing more oil in order to offset exceptionally high gas prices. According to data from AAA, although the price for a gallon has dropped in recent weeks, it currently stands at $4.53 on average as of Sunday. A year ago, the price was $3.16 per gallon, the data show.